Jürgen Klopp insists Liverpool title party is not on his mind

Fabinho, Dejan Lovren and Joel Matip may be given first starts of year at Shrewsbury 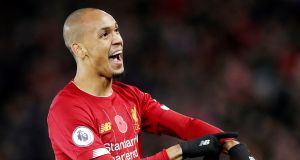 Liverpool’s Fabinho has not started a game since November 27th. Photograph: Reuters

Jürgen Klopp believes Liverpool can still improve on their outstanding season as he considers handing Fabinho, Dejan Lovren and Joel Matip their first starts of the year at Shrewsbury on Sunday.

Liverpool recorded a remarkable 22nd win from 23 Premier League matches at Wolves on Thursday to go 16 points clear at the top of the table with a game in hand on second-placed Manchester City. Their manager insists he is not “even 2 per cent” thinking of a title party just yet but the depth of his formidable squad has increased with the trio in contention to start the FA Cup fourth round tie.

Fabinho made his second substitute’s appearance since recovering from ankle ligament damage on Thursday but has not started a game since November 27th while central defenders Lovren and Matip have not played since December 10th and October 20th respectively. All three could feature against the League One side, with Klopp also keeping faith with the bulk of the team that humiliated Everton in round three.

The Liverpool manager, who also has Naby Keita back in training after injury but is awaiting the results of a scan on Sadio Mane’s hamstring problem, said: “We will have a team with fresh legs and we have players coming back from injury. It makes sense to play them because they are pretty good and we want to go through. It’s a tough place to go, as it always is in cup competitions.”

Klopp insists there will be no let-up from his reigning European champions despite their emphatic lead in the Premier League. “There is no 10 per cent party in my mind, no 15 per cent, no 8 or 2 per cent, there is just no party,” he claimed.

“After the Wolves game we had this little meeting where I tell the boys what I think. I had to remind myself to say ‘Congratulations, the result was outstanding’. We have no time to make assessments, we analyse our next opponent and then we go in. It is not that we forget what we have to do better. There is still a lot to improve. That is our life. Anyone in the past who looked like they would win something and then stopped never got rewarded in history.”