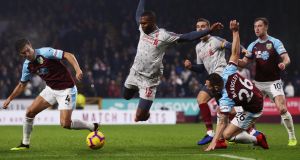 Daniel Sturridge of Liverpool is tackled by Phillip Bardsley of Burnley during the Premier League match at Turf Moor. Photo: Nigel Roddis/Getty Images

Jürgen Klopp has rejected Sean Dyche’s claim that Daniel Sturridge cheated at Turf Moor and described the allegation as a diversion tactic by the Burnley manager.

Dyche highlighted the Liverpool striker’s theatrics when defending his players from Klopp’s criticism after Wednesday’s game. The Liverpool manager was unhappy with a number of Burnley challenges during his team’s 3-1 win despite accepting that many were not fouls. That left Dyche perplexed, and prompted the Burnley manager to say: “I notice he did not make any reference to Daniel Sturridge cheating.”

Klopp responded on Friday: “Daniel Sturridge is no cheat. I think what Sean tried to do there is to bring up another subject so somebody could speak about that. I’m not sure if he spoke about the challenge of Bardsley on Alberto Moreno. We all have our own interests and aims.

“After that game they are talking about one situation where a player goes down without contact. I don’t know if the referee even judged it. It was a normal situation which can happen – sometimes a striker expects a tackle and tries to avoid it by jumping. I can’t avoid it if people want to discuss Daniel, but on the other side I said what I had to say about that after the game, and different opinions are allowed obviously.”

Liverpool lost Joe Gomez for six weeks after the Burnley game with a fracture to his lower left leg. Klopp admits the lay-off could have been much longer.

“It’s just a shame for the boy,” he said. “For us of course as well. He was in outstanding shape, he helped us a lot and especially because we could make these changes with Trent [Alexander-Arnold] and Joe and that was really important because Trent is still a young boy and we cannot push through 20 games in a row. He would probably say it’s possible but I think it’s responsible that we have a little eye on that. Together with Virgil, he improved so much … It is a bit lucky because it could have been worse.”

Klopp confirmed that Liverpool will also be without Dejan Lovren and Dominic Solanke at Bournemouth on Saturday. Andy Robertson is fit having missed the Burnley win through injury but Sadio Mané is likely to miss out again with a cut foot. – Guardian service