Jürgen Klopp focusing on keeping the mood right at Liverpool 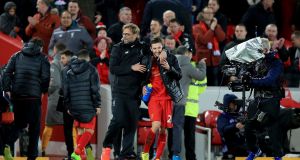 Jürgen Klopp has admitted Liverpool lack quality and that Burnley will beat them again on Sunday unless he creates the right mood and confidence among his players.

Liverpool lost 2-0 at Burnley on August 20th, in one of their poorest displays this season. On Saturday they beat Arsenal 3-1 – Georginio Wijnaldum’s added-time strike supplemented first-half goals from Roberto Firmino and Sadio Mané with Danny Welbeck replying – but this came after a 3-1 defeat at Leicester City in the previous match.

Although defeating Arsenal lifted Liverpool back into a Champions League berth, two points clear of Arsène Wenger’s fifth-placed side, Klopp is concerned about inconsistency.

Whereas Liverpool have taken 19 points from a possible 27 against other top-six teams they have struggled against those in lower positions, as the defeats by Burnley and Leicester indicate. Liverpool also lost at Bournemouth, drew at Sunderland and were beaten by Swansea City at Anfield.

Asked about this, Klopp pointed to a lack of quality. “I don’t want to make it too philosophical – it is obviously the case we are inconsistent. I know we don’t have to doubt the attitude, and the kind of attitude we usually are looking for was here against Arsenal; they were really motivated and you cannot play like this if you have any issues. But we struggled in other games. So, okay, you say it is about quality and sometimes probably, yeah, we don’t have the quality. But with quality you have potential, and you make quality with work and all that stuff.

“If we judge the players after the best game of the season, then we sign a contract for another six seasons; if we do it after Leicester then you change the whole squad. But the truth is always in between. That is what we are working on. There will be moments when we play like this [against Arsenal] and win again and it will be against a team not in the top six. But we have to work on it, first of all we have to feel like it is possible.”

The manner of the loss to Sean Dyche’s side in August is a concern as Liverpool were overrun in midfield. Klopp is intent on building his players’ confidence to avoid a second, disappointing reverse.

He said: “The whole week [coming] is different. When the week starts after Leicester everybody was angry, then we produce this performance against Arsenal. But then the question is immediately about Burnley and it starts already: ‘Oh, how can we do this?’ The legs feel already very heavy for the next game. My job is to produce the right mood, and I feel especially responsible after not so good performances, [so] we work on it.”

Klopp is candid that disappointing results affect his players’ spirits more than positive ones. He cited the 1-0 victory over Manchester City on New Year’s Eve and the draw at Sunderland three days later.

“We played Man City – they are really strong – we won 1-0. If this victory had given us as much confidence as the draw at Sunderland had given us a knock, then everything would be fine. But it was not like this. Man City was: ‘We can do it sometimes’; Sunderland was: ‘Yeah, that is the usual face.’ So we have to keep on going in these parts and then, finally, probably everything will be good. I don’t like inconsistency, I made it pretty clear, but at the end, until now, it was part of the deal, obviously.

“The important thing in a development is that you take the information you get, work with it. Most of the info, you don’t like . . . We are all a bit like this: we let the bad things influence us more than the good, otherwise we would celebrate our birthday maybe longer than one day.”

Despite his concerns, Klopp is sure of unity. “Especially in this moment, the club is completely together. Everybody expects we already should be somewhere else [higher]. I understand this, it is our aim. We are fine, the owners are fine, they are with us, the players – we have a wonderful relationship. But that doesn’t mean we say every day what they want to hear. It means we work on the things we are not as good as [we should be].”

1 Waterford turn Kilkenny upside down and inside out on way to All-Ireland final
2 Jim McGuinness: There is a way to save championship and make it competitive
3 Waterford’s frenzied waves of attacks too much for Kilkenny
4 Sordid murder of hurling brothers still resonates in south Galway
5 Klopp furious as injuries mount and VAR decisions prove costly
Real news has value SUBSCRIBE