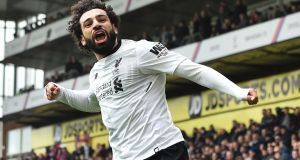 Jürgen Klopp has predicted “there will be fire” when Liverpool face Manchester City on Wednesday and believes that, at their best, his team can stand as equals with the Premier League’s champions-elect.

Liverpool showed little of the verve they will need to achieve that in defeating Crystal Palace 2-1 on Saturday, a performance Klopp said owed much to the staccato preparation necessitated by the international break, but the Champions League quarter-final first leg promises a different level of intensity and he believes the atmosphere inside Anfield will make for a gripping affair.

“If I had the choice to watch a Champions League game on Wednesday I would watch this one,” Klopp said, before stopping short of suggesting strategy will go out of the window between two sides whose default setting is to attack. “I think it’s really not . . . it is about tactics but there will be fire in the game, so that’s cool.”

It would take something to outdo the fever that enveloped Liverpool’s home in January, when they beat City 4-3 in perhaps the best match of this domestic season, but Klopp instantly referred to the 5-0 defeat at the Etihad Stadium four months previously when asked what he learned from their previous meetings.

“At specific moments I think we are on a similar level, but they did it much more consistently. So I have no problem respecting them, but we all know in this game that it doesn’t mean too much so if we see our chance …”

Rather than leaving that condition hanging in the air he quickly stressed that Liverpool’s task is “unbelievably difficult”. He does, at least, possess a player who makes the hardest jobs seem simple. Mohamed Salah’s latest showstopper came six minutes from time against Palace, converting his 41st goal of the season consummately - perhaps making the difference between a struggle for the top four and a serene domestic run-in.

Klopp was reminded of the injury-time penalty Salah scored for Egypt against the Republic of the Congo in October, which secured their World Cup qualification, and asked whether a moment of such pressure had prompted the forward to take greater responsibility in Liverpool’s colours. He did not go that far but suggested it was a watershed moment in Salah’s career. “It’s responsibility, of course, but nobody told him he had to score 30 goals otherwise we can’t be successful, and now we don’t tell him that if he doesn’t score we can’t win,” Klopp said.

“The penalty he scored [FOR EGYPT], by the way, I nearly had a heart attack. We all have these game-changing moments in our lives and maybe that was one of them. If you deliver in a situation like this, what can happen to you then?”

Both Klopp and Salah will hope any further heroics are not undone by mishaps in Liverpool’s own half. They were lucky to get away with two glaring Christian Benteke misses and also looked brittle early on, Loris Karius saving brilliantly from Wilfried Zaha before conceding the penalty from which Luka Milivojevic put the home side ahead.

“A lot of our opponents, people think they defend better, but there are a lot of moments when [THEIR]goalkeepers make spectacular saves and we usually don’t have that - today we had it,” Klopp said. - Guardian Service