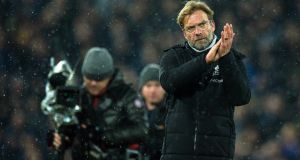 An inviting draw with Porto in the last 16 of the Champions League provided a welcome distraction for Liverpool on Monday, and timely illustration of progress, but their anger at how victory slipped away in the 229th Merseyside derby lingers. As do questions over the team selection that ensured Everton’s negativity and Dejan Lovren’s rashness were not the only complications for Jürgen Klopp at Anfield.

The Liverpool manager was more preoccupied with referee Craig Pawson’s penalty decision in his angry and patronising post-match interviews than a detailed discussion on why Philippe Coutinho and Roberto Firmino, along with regular midfielders, started on the bench on Sunday. He did accept blame for rotating and not winning while maintaining it was the correct decision “even when the result doesn’t show it”. If that added to the confusion, there was more clarity in his argument the selection policy was vindicated by a thoroughly dominant Liverpool display.

But for Sadio Mané’s poor miss having opted against squaring to one of three better-placed colleagues closing in on Jordan Pickford’s goal, the derby would have been beyond Everton by half-time. Criticism of Klopp’s choices would have been redundant, and should have been with Liverpool creating several opportunities in the second half and self-imploding when Lovren needlessly pushed Dominic Calvert-Lewin with the young striker running away from goal.

By gifting Everton an undeserved lifeline, however, Liverpool invited scrutiny on a selection policy that may be necessary at this hectic stage of a season but ultimately appeared over-indulgent for one of the biggest league games in Anfield’s calender. Liverpool play West Bromwich Albion at home on Wednesday followed by Bournemouth away four days later. Klopp was not short of options for when to rest Coutinho, Firmino, Georginio Wijnaldum and Emre Can when finalising his lineup for the derby.

The Liverpool manager arguably missed an opportunity to rotate his forward line ahead of the derby. Spartak Moscow were 5-0 down after 50 minutes at Anfield last Wednesday yet only Firmino was withdrawn – on 72 minutes – as Coutinho, Mané and Mohamed Salah completed the full 7-0 rout of the Russian champions.

There is some irony, in hindsight, in Lovren being the other player who was substituted against Spartak in readiness for Everton’s visit. With Joel Matip sidelined through injury and Alberto Moreno an enforced substitution in the Champions League tie after damaging tendons in his ankle, Klopp opted to protect his defensive options rather than his prolific attack. He must have wondered why he bothered during the derby given the paucity of Sam Allardyce’s ambition.

“I would say yes, it did give us a boost,” the Everton manager admitted of seeing Coutinho and Firmino omitted from Sunday’s starting lineup. “But they still had an array of outstanding players on the pitch including the main man who scored the goal [Salah]. He is probably Liverpool’s greatest threat and one of the biggest threats in Europe at the moment, but we kept him down to a few shots. You had two of their best scorers on the pitch and we kept them extremely quiet. We might have kept Coutinho quiet if he had played. He didn’t get a shot on target when he came on.”

He did, a free-kick saved by Pickford, but he also struggled to pick a hole in Everton’s two belligerent banks of four.

Rotation brings inherent risk and Klopp had skilfully avoided the pitfalls before Sunday. Mané and Coutinho, both having suffered injury in recent months, have been handled carefully against Chelsea, Stoke City and Brighton and Hove Albion. There is also a requirement on the Liverpool manager to avoid another damaging winter and maintain a two-pronged assault on the Champions League.

Liverpool won five, drew five and lost five of 15 matches in all competitions in December and January last season. A January slump effectively ended their interest in the Premier League title race as well as both domestic cups. The previous December and January, during Klopp’s first campaign in English football, yielded a similar return of six wins, five draws and five defeats.

Avoiding a repeat this season is imperative and demands rotation but breaking up the “Fab Four” for a derby seemed a needless risk before kick off on Sunday. And another self-inflicted headache for Liverpool afterwards. – Guardian