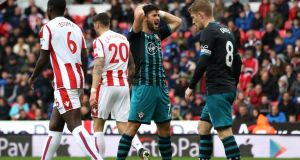 Shane Long was the only Republic of Ireland international to start a game in the Premier League on Saturday.

The Tipperary native played all 90-plus minutes in Southampton’s 2-1 defeat to Stoke, which leaves them in 12th place in the table, ahead of the Potters only on goal difference.

Long’s last league goal was in early February, and while he failed to end that barren run on Saturday, he did assist Mayo Yoshida’s goal with a flick-on header.

James McLean came on after 62 minutes in West Brom’s 2-2 draw with Watford. Ireland’s best player in the last two World Cup qualifiers against Georgia and Serbia, has started all of the Baggies’ last four games on the bench. In the 90th minute he picked up a yellow card.

Young Declan Rice was an unused substitute for West Ham as they saw off Swansea, the 18 year-old has already started two league games and came on in another two so far this season.

David Meyler played all 90 minutes and scored in Hull’s 6-1 win over Birmingham. His goal came via a penalty, after he assisted Fraizer Campbell’s opener.

Glenn Whelan and Conor Hourihane were Aston Villa’s midfield partnership in their 1-0 win over Bolton, with Scott Hogan coming into the action after 63 minutes.

Richard Keogh was centre back for Derby, helping them keep a clean sheet in a 0-0 draw away at Cardiff City.

David McGoldrick and Callum O’Dowda were in opposition for their respective Ipswich and Bristol City teams, with the latter coming away from Portmon Road with a 3-1 win.

Daryl Murphy failed to build on three goals in his last four games, in Nottingham Forrest’s 2-1 win over Sheffield United

Aidan McGeady scored in Sunderland’s 2-2 draw with Preston North End. He cut in from the right and swept home left-footed from 20 yards before running to the opposite end to celebrate in front of the Preston fans who had booed him on his return to Deepdale.

John O’Shea was at the centre of the Black Cats defence while Darron Gibson an unused substitute. For Preston Seanie Maguire played 88 minutes while fellow League of Ireland export Daryl Horgan played the final 20 minutes.

Liam Kelly and Paul McShane both started for Reading, as they faced Norwich in the late kick-off. Wes Hoolahan was back in the starting XI for the latter.

1 Sideline Cut: Vignette shows why Bird is the true shark in The Last Dance
2 Coming fourth in the Olympics didn’t change this fearless quartet, time did
3 GAA preparing for earlier return to activity but pitches to remain closed
4 Brendan Rodgers says he was ‘really knocked’ by coronavirus
5 Anfield and Cheltenham show sports again lacking in looking after their own
Real news has value SUBSCRIBE