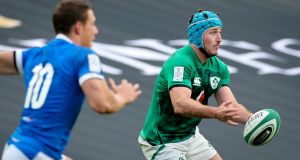 Will Connors impressed on his Ireland debut. Photograph: Billy Stickland/Inpho

Spilled one bread and butter catch. 71 metres off five first half carries showed a real desire to bust the Italian line from deep and made decent yardage off his pounding left boots. Rating: 7

The best attacks went down the left wing but you could hear him roaring instructions to the defensive line whenever trouble was brewing. The blood hound in him kept working away perhaps aware that Keith Earls is a clear threat to his jersey. Rating: 6

In 25 minutes he ensured Conor Murray’s sin binning was never an issue with a return to his teenage days at scrumhalf. Broke his jaw bravely blocking a kick. Awful luck for Ireland’s form player. Rating: 6

Slick try and important vocals from Connacht’s greatest ever player whenever the team went quite, coupled with some nifty breaks and clever distribution that should be enough to see Henshaw replace Ringrose at 13 against Franceh. Rating: 7

The lost hat-trick, but two classy finishes on debut, more in the style of Izzy Dagg than his 1980s namesake, although Hugo MacNeill’s 40 caps - including three for the Lions - is a realistic target for this 24-year-old who is brilliant at hunting down opponents off the kick chase. Rating: 8

Created a score for Italian winger Eduardo Padovani but atoned with his own try. Nailed three touchline conversions and while he looked rusty a return to Paris - where his legendary status was secured by the 2018 drop goal - should focus the mind. Rating: 7

Looked to have sucked the momentum out of Ireland’s counter attack before a lovely grubber bounced up nicely for Keenan. Expectations for Murray to be other worldly are always there. Rating: 6

Scrum penalty, when squeezing Giosué Zilocchi into submission, and plenty of mobility in the early exchanges was probably enough to keep Ed Byrne at bay for the big games this winter. Rating: 6

The South African is keeping up his end of the bargain, one missed throw aside, by forcing Ronán Kelleher to come and take the hooking berth off him. Solid. Rating: 6

Lots of back slapping for latching onto several Italian ball as the education of a former loosehead at tighthead continues apace. The French scrum will ask far more punishing question than the Azzurri pack could. Rating: 7

Easily led the tackle count at half-time (12), finishing with 15, without ever looking like the enforcer lock Ireland need but he slashed through plenty of bodies all the same. Reliable option. Rating: 7

Looked to be carrying a left shoulder/arm issue about the pitch and that would explain the uncharacteristically low numbers of just seven tackles and six carries. The lineout hummed along to his tune but pulled on the hour mark. Rating: 6

Ripped the ball out of an Italian ruck in Ireland’s 22 to create the length of the field counter attack for Keenan’s second try. Superb all round display that suggests No 8 is where he belongs. Rating: 8

The former Clongowes openside can take that tackle technique anywhere in the world and get paid to play rugby. Serious achievement to work his way past Scott Penny and Josh van der Flier to earn his first cap. A stunning 19 tackles. One try. Decent start! Rating: 8

Ireland appear to have mixed the numbers up with the blindside but the usual unbreakable CJ shift should never be taken for granted. Loves the punishment that comes with 75 metres off 21 carries. Rating: 7

Henshaw arrived for Ringrose to instantly disprove the theory that he does not possess a passing game, when creating Keenan’s first try. Peter O’Mahony’s spectacular offload for Aki’s try deserves a mention. So does Dave Heffernan’s late try. Rating: 7

Blooded four players in a performance that hit the half century, so no major complaints but the French will have identified plenty of areas to attack. Fascinating team selection coming up. Rating: 7