Injury blow for Séamus Coleman ahead of Euro 2020 playoff

Carlo Ancelotti says right-back’s injury, suffered in win over Brighton, is only ‘small’ 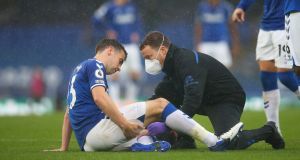 Ireland captain Séamus Coleman could be in doubt for the Euro 2020 playoff away to Slovakia on Thursday after he limped off holding his hamstring in Everton’s 4-2 win over Brighton on Saturday.

The news will come as a concern to Stephen Kenny as Coleman has been one of the most in-form Irish players in the last few weeks. After 58 minutes of Saturday’s win he was replaced by Fabian Delph after receiving treatment before walking off holding his hamstring.

Afterwards, Everton manager Carlo Ancelotti said he believes Coleman’s injury is only “small” but, with Ireland’s playoff in Bratislava only a matter of days away, it might come too soon for the Ireland captain.

Coleman did not play any of Kenny’s first two matches in charge of Ireland with the new manager opting instead for Matt Doherty at right-back but, given his current good form, it was expected that the Irish captain would be brought back into the team for Thursday’s win-or-bust meeting with Slovakia.

The news will also worry Everton manager CAncelotti who has been full of praise for the key part Coleman has played in Everton’s good start to the season.

In Saturday’s only 3pm kick-off, Dominic Calvert-Lewin became Everton’s first player to score in the opening four matches of a Premier League season as the Toffees kept their perfect start intact.

The result left Everton top of the standings on a maximum 12 points from four games, three ahead of Leicester City and champions Liverpool, who each have a game in hand.

Calvert-Lewin took his tally to nine goals from six games in all competitions when he rose at the far post to head home a Gylfi Sigurdsson cross in the 16th minute before Neil Maupay levelled from close range in the 41st.

Good work from substitute Alex Iwobi presented Rodriguez with a second-half brace as he swept the ball home from eight metres to make it 3-1 in the 52nd minute before he capped another flowing move in the 70th.

Midfielder Yves Bissouma pulled one back for the visitors with a cracking shot from 25 metres in stoppage time but it was too little, too late to deny high-flying Everton a fourth successive league win.