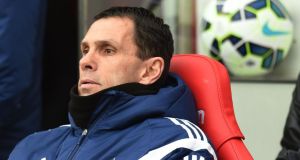 Gus Poyet has been fired as manager of Sunderland. Photograph: PA

Gus Poyet has parted company with Sunderland after the club decided to fast-forward plans to replace him in the summer.

The Uruguayan’s sacking ends an often turbulent 17-month tenure on Wearside featuring a near-miraculous escape from relegation, a League Cup final and increasing tensions with the club’s board.

Lee Congerton, the sporting director, has begun the hunt for a short-term successor to coach the team until the end of the season, when a longer-term replacement will be sought.

Negotiations are under way to potentially bring in Dick Advocaat, the 67-year-old former Rangers manager who is out of work after stepping down as Serbia’s coach last November. Other temporary candidates are under consideration and it is possible that Sunderland could look inside their youth academy and place Kevin Ball and Paul Bracewell in immediate charge.

It has been apparent for some time that a parting of the ways in June was near inevitable but a majority on the board had hoped Poyet could keep Sunderland in the Premier League while seeing this season out.

That stance changed when the team surrendered to a 4-0 home defeat by Aston Villa on Saturday. It is understood that Sunderland’s owner, Ellis Short, the chief executive, Margaret Byrne, and Congerton decided during talks on Sunday that a managerial change was needed. Poyet’s assistants Mauricio Taricco and Charlie Oatway have also left the club.

A watershed was reached when half the near-46,000 crowd vacated the stadium in protest by half-time of a match that left Sunderland only one point above the relegation zone. With Poyet’s team having won only two Premier League games at the Stadium of Light all season and relations between manager and board extremely tense, the scene was set for the separation confirmed on Monday.

Poyet took first-team training at Sunderland’s Academy of Light weekday headquarters on Monday morning, although by then was very much a “dead man walking”, before being summoned to have his fate sealed.

His long-term successor will be expected to work as a head coach, reporting to Congerton in a continental-style director of football system. This dictates Sunderland are likely to seek a Steve McClaren-type tracksuit manager rather than a Sam Allardyce-style figure. Whoever ends up in the job will be the third manager Short has hired in three frequently traumatic years, largely spent battling relegation.

With the international break following Saturday’s trip to West Ham United the idea is that Poyet’s immediate successor will have time to work with his players before a vital run-in, starting with a home derby against Newcastle United on 5 April.