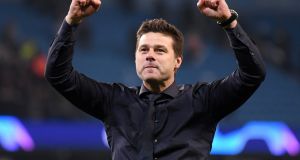 Pep Guardiola is emphatic he will never change Manchester City’s attack-first style, despite his team being knocked out of the Champions League in a draining manner by Tottenham Hotspur.

Mauricio Pochettino’s team are at the Etihad Stadium again in the Premier League on Saturday, and with City then facing a trip to Manchester United on Wednesday, Guardiola has two matches in five days that will define his team’s title defence.

City defeated Spurs 4-3 last Wednesday, but were eliminated from the Champions League on away goals. This follows a pattern of conceding many goals in high-stakes matches. Last season they lost 3-0 to Liverpool in the quarter-final first leg and 4-3 in a January league game at Anfield. In the previous Champions League campaign City beat Monaco 5-3 in the last-16 home match before losing 3-1 in the return.

“We concede a lot but we score a lot,” Guardiola said. “You have to remember the game at Anfield [in last season’s Champions League] – they had three shots on target, three goals. But we’ve scored 154 goals [this season], we’re not going to change. If it’s not enough to go through then I’m sorry guys. In good moments and bad, we are honest in the way we want to play. We have to be focused but it happens. People make mistakes, make a good action or bad. All season, not just these specific games, I’m proud.

“I like to see them play like this. I prefer this way. In this situation we did everything. We have to improve the defence in this stage of the competition – but in general we always want to improve.”

On Saturday Spurs need to win in their hunt for a top-four place – they are one point clear of fifth-placed Chelsea with a game in hand – and in midweek United require points for their tilt at a Champions League berth. This makes Guardiola’s task in raising morale all the harder and he admits being unsure how players will react against Tottenham.

“Before the game you don’t know how you will play, you never know how you’ll react,” he said. “We were out [of competitions] other times and we reacted well. But really I don’t know.”

After United, City travel to Burnley, host Leicester City and are at Brighton & Hove Albion before Watford’s visit on the final day. The equation is simple: City are two points behind Liverpool with a match in hand, so if the remaining five are won the quest to join United and Chelsea as clubs to retain the Premier League title will be successful.

City’s push for the quadruple, though, is over, and although Guardiola admits the number of matches caused complications he said he would continue to field strong teams next year in all of the cups.

“You think the team was tired?” he said. “In my profession, to say I don’t want to win – I don’t understand that. If I lose it’s because the opponent beat me. I’m not going to drop any competitions. I will try. I will dream next season of fighting for the four titles . . . I like it that way. I love it.”

Although Guardiola protests otherwise, City have appeared on the edge of weariness for a while, which is no surprise when only Chelsea in 2006-07 have gone deeper into all four major competitions.

In Sergio Agüero, who is 30, David Silva (33) and Fernandinho (34 next month), the manager has a core who are battle-hardened but ageing. Guardiola’s challenge is to convince these senior players of a last push to try to retain the title.

A case can be made that Pochettino’s team might find it hard to refocus after their heroics in following Bill Nicholson’s 1962 vintage to become the second Tottenham team to reach the European Cup semi-finals. But their manager is determined to ensure that does not happen.

“Maybe [the game is] difficult as our circumstances are not the best,” said Pochettino, whose injury list includes Harry Kane, Moussa Sissoko, Serge Aurier and Harry Winks.

“They have nearly all players fit and we need to assess players and we will miss some players that are so important, and we need to think how we are going to mix.

“But we need to be sure that we are going to be ready to fight them and challenge them and it will be tough. They are not going to fight for revenge. Of course they will try to win the game, as they need the three points like us.

In the league there is no VAR, which twice intervened on Wednesday to aid Tottenham. First, Fernando Llorente was deemed by VAR not to have handled the ball when he scored. Then, what would have been Raheem Sterling’s tie-winner at the end was ruled out by the system for offside.

Yet Guardiola could strike a humorous note despite the misfortune. “Talking about VAR is boring. Sometimes it helps you, sometimes not,” he said. “VAR is created to help the referees – what can I do?” He knows what his team must do in the next two matches: win.

1 Seán O’Brien: Anger over my parents’ break-up never left me
2 Madness or defiance? The GAA is taking a huge gamble in staging Championships
3 Plenty of positives for Farrell as Ireland hit the ground running
4 Sportsman to statesman, Marcus Rashford is a ray of light in the darkness
5 The Offload: Outgoing Tom Grace will be missed by IRFU
Real news has value SUBSCRIBE