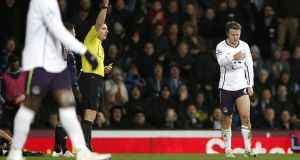 Aiden McGeady is likely to get a rare start for Everton in their FA Cup fixture against Dagenham and Redbridge. The Ireland winger was sent off during last season’s third round defeat to West Ham. Photograph: Getty

Everton outcasts Darron Gibson and Aiden McGeady are both in line for a rare start when the Toffees take on Dagenham & Redbridge in the FA Cup on Saturday.

Gibson and McGeady have been limited to five and four appearances respectively so far this season, but Roberto Martinez is likely to give the Ireland duo a run out against a side currently languishing third from bottom in League Two.

Ahead of the third round clash Martinez said: “My own experience tells me there is no such thing as using your divisional status in any cup run.

“We respect immensely Dagenham & Redbridge, who will come to Goodison with a desire and belief to qualify and we must match that.

“But this game is really important because it will give us a lot of information about our own squad.”

McGeady and Gibson have both been linked with moves away from Goodison Park in the January transfer window and Martinez has admitted he may let both move on as they search for regular football in a bid to force their way into Martin O’Neill’s Euro 2016 plans.

Martinez said: “We have had a lot of interest from Darron Gibson and Aidan McGeady and we need to sit down and consider what is the next step.

“It has been disappointing for them not to have enough minutes on the pitch and they need to be playing until the end of the season due to the opportunity of playing for Ireland in the Euros.

“They deserve to have special attention at this stage of the season. They haven’t played enough and now is a good opportunity to see if the second half of the season can be a good one.”

However Stoke City boss Mark Hughes will not be affording the same treatment to Shay Given and Marc Wilson.

Given is currently playing second fiddle to the impressive Jack Butland at the Brittania Stadium, while Marc Wilson hasn’t started for the Potters since the defeat to West Bromwich Albion on August 29th.

But Hughes is adamant he will do what he feels is best for Stoke, even if it means putting the duo’s Euro 2016 hopes at risk.

Hughes said: “If you start loaning players out because they want game time for the European Championships it would be the wrong situation to get involved in.

“It would have to be in our interests too and so be a win, win situation.”