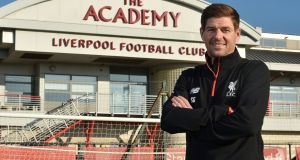 Old rivalries die hard or, as the reactions of Steven Gerrard and Nicky Butt to a Rafael Camacho goal showed at Prenton Park, not at all when it comes to Liverpool versus Manchester United.

Gerrard sprung from the bench, punching the air Jürgen Klopp-like, when the Liverpool substitute swept his team into the Uefa Youth League quarter-finals. Butt, another veteran of the Premier League’s fiercest rivalry turned youth team coach, turned his back on Liverpool’s celebrations and kicked the ground. Defeat in this fixture never gets easier.

Liverpool were deserving winners of a last-16 tie their coach had described as “more juicy” and requiring no extra motivation due to the nature of the opposition. Gerrard was addressing his players but may well have been speaking from within. As he admitted: “The reason I want this challenge is because I can’t go and find it myself as a player any more.”

United’s coach surmised the European tie in a manner reminiscent of a more senior predecessor at Old Trafford who did more than most to fuel the animosity between the north-west clubs. “We were nowhere near it in the first half,” Butt said. “We were too nice. They weren’t. They won all the 50-50s and I told the lads at half-time that it was unacceptable.” His team improved significantly in the second half but it is Liverpool who advance to meet Manchester City in the last eight.

Republic of Ireland under-21 centre back Conor Masterson lined out in the heart of the Liverpool defence, while Irish under-17 international Glen McAuley replaced Woodburn in injury time. Irish youth international Lee O’Connor played on the left side of midfield for United before going off in the 84th minute.

It was a shame only a sparse crowd was present to catch a glimpse of the future. One section of the main stand at Prenton Park was open for a crowd numbering the low hundreds. Admission prices of £3 for adults and £1 for children were a welcome incentive but a kick-off time of 3pm on a Wednesday proved an inevitable obstacle to a larger attendance. Arguably it was an unavoidable obstacle, given that Uefa set kick-off times in its youth competition to avoid clashes with the big brother of the Champions League, although a 4pm start would have attracted more from school.

Of more concern to Butt, obviously, was the result and a first-half performance where United failed to function as a team. “They started with a diamond and we killed them for 35 minutes,” said Gerrard. It was no exaggeration. The game should have been beyond United by half-time and at one point their coach smacked the roof of his dug-out as annoyance over losing another challenge boiled over. “Second balls! Win the second balls,” he shouted.

The visitors included Scottish central midfielder Ethan Hamilton and Angel Gomes, who were both on Jose Mourinho’s bench for the FA Cup win over Huddersfield Town on Saturday, the former summonsed after Paul Pogba withdrew through illness. The pair were contained comfortably by Liverpool’s central midfield pairing of Elijah Dixon-Bonner and Herbie Kane while Tahith Chong, United’s highly-rated Dutch winger, also struggled to impose himself.

Chong’s touch and pace caught the eye when United staged a necessary recovery in the second half but more striking was the frequency with which he berated team-mates for perceived mistakes, even when he was culpable for them. The 18-year-old’s frustration at the scoreline and overall performance was understandable – especially when his shot to equalise was cleared in front of the line by Masterson – but it jarred that he was on his team-mates’ case from the very start. It was no coincidence that United improved as a team when the individualism subsided.

By then, however, they trailed to Ben Woodburn’s header from a Neco Williams cross, one that goalkeeper Alex Fojticek got a hand to but could not keep out, and survived several near-misses as Liverpool took control from the start. Woodburn was brought in from Klopp’s first-team squad with the specific aim of guiding his peers into the quarter-finals and fully vindicated the decision.

“Ben dropped down but you could see he was happy to be with his friends again,” Gerrard said. “They are all friends. We’ve got a team there.”

Liverpool certainly have. Curtis Jones and Bobby Adekanye were highly impressive down the flanks, the latter exiting with cramp in his calf at one point yet reappearing with an ice-pack on his head, and it was Adekanye’s replacement, Camacho, who sealed a deserved victory with a long-range shot late on. – Guardian service