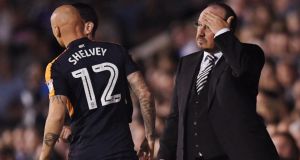 Rafael Benítez saw his Newcastle side beaten in their Championship opener against Fulham. Photograph: Reuters

The eyes of the world were glued to the greatest sporting event of them all and the carnival atmosphere pulsed. Welcome back, English football, you have been missed. This was the night when Rafael Benítez and Newcastle United were supposed to flex their muscles and show their Championship-winning intent.

Instead it was one in which Fulham earned a deserved victory and reminded their visitors of why this division is such a cut-throat place. They had stood as something of a cautionary tale to Newcastle. Since their relegation from the Premier League the London club have finished 17th and 20th at this level.

They had lost arguably their best two players from last season over the summer – the strikers Ross McCormack and Moussa Dembélé – but, inspired by Sone Aluko, one of the many new faces in Slavisa Jokanovic’s new-look line-up, they got the job done.

The winning goal came when Matt Smith powered home Tom Cairney’s corner in first-half injury-time and Newcastle were left to lament a pair of penalty appeals for handball that were not given. Both might have been. Newcastle have their reality check.

Craven Cottage has long been considered as a good away venue and those who had travelled in Newcastle colours wanted to believe it could be the start of their club’s recovery. It had been easy to detect the Benítez-inspired positivity and the manager’s starting line-up featured five of his eight summer signings. Jokanovic included all eight of his for Fulham. Songs in support of Benítez came from the visiting enclosure.

Newcastle have been down in this division in the not-too-distant past and this season it seems fiendishly competitive. There was a high tempo here, the kind of blood-and-thunder commitment that has long been associated with the Championship and led it to be described as the toughest league in Europe.

Both teams were desperate to put down markers and to impress in front of the live TV audience. For much of the first half it appeared a question of waiting for a football match to break out and, for many of the Newcastle players who might have grown used to the Premier League, it was a jolt. Time on the ball was at a premium. Just ask Ayoze Pérez.

Newcastle were furious about the non-award of a penalty in the 35th minute. When Matt Ritchie cut a high cross back from the left and Ryan Tunnicliffe leapt to block with his arm, the Fulham midfielder felt the ball hit his hand. Newcastle’s pleas were vociferous and they stuck in their throats when the referee, Simon Hooper, took no action; it looked like a bad decision.

Fulham had appealed for a penalty of their own moments earlier but it was less clear cut. Aluko, the club’s new striker, who was fast and willing, tore on to a loose crossfield pass from Daryl Janmaat and he saw Grant Hanley lunge in to stop him. Hanley got a slight touch to the ball before he caught Aluko. The home support made their feelings plain.

Fulham grew into the game and the breakthrough came just before half-time from Tom Cairney’s outswinging corner. The Newcastle inquest will centre upon why Smith, who is hardly difficult to spot inside the box, was granted such space. He was Jamaal Lascelles’s man and, perhaps, Paul Dummett’s slip provided a distraction. Smith’s header was well directed.

Pérez had put an early free-kick into the Fulham wall and, following a long ball forward, the Newcastle striker, in on the left side of the area with the angle tight, had miscontrolled horribly. Fulham hearts fluttered in the 41st minute when Aluko accelerated and unleashed a low shot, which Matz Sels could only parry. Dummett cleared before Smith could reach the rebound.

The Sky cameras were all over Benítez, shadowing him on the long walks between the tunnel in the corner of the stadium and the bench on the far side. He had better get used to it. The Spaniard is the biggest name not only at Newcastle but in the division.

There were flashes of composure and quality, amid the intensity and the pressure on the ball, from Cairney and his towering midfield team-mate Kevin McDonald, while Vurnon Anita and Ritchie sought to exert their influence for Newcastle. It was Anita who set up Ritchie for the clear chance early in the second half but David Button produced a reflex save.

The final quarter of the game was gripping and studded with action at either end. Ritchie worked Button from distance and Rolando Aarons, the substitute, air-kicked when well placed. Scott Malone shot wide after swapping passes with Aluko and Floyd Ayité was denied by Sels after tricking his way through. There was also time for Tomas Kalas to block Ritchie’s shot with what looked like an arm. Again, Hooper was unmoved. It was not Newcastle’s night.

4 Ian O’Riordan: Zen and the art of social distance running