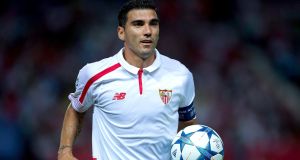 Jose Antonio Reyes, the ex-Arsenal and Spain forward, has died in a car crash at the age of 35, former club Sevilla have announced.

Reyes was part of Arsenal’s ‘invincibles’ squad that won the 2004 Premier League title without suffering defeat.

He also played for Real Madrid, Atletico Madrid and Benfica during his career, as well as winning 21 caps for Spain.

Sevilla said in a statement on Twitter: “We couldn’t be confirming worse news. Beloved Sevilla star Jose Antonio Reyes has died in a traffic collision. Rest in peace.”

Reyes started his career at local club Sevilla and returned to the Andalusian side in 2012, helping them to win three successive Europa League titles.

He left the club in 2016 and played for Espanyol, Cordoba and Chinese side Xinjiang Tianshan Leopard before returning to Spain to join Extremadura earlier this year.

The second division club said in a statement on their Twitter account: “With a broken heart Extremadura UD announce the death of their player Jose Antonio Reyes in a traffic accident.”

As well as lifting three Europa League titles with Sevilla, he was also part of the Atletico Madrid squad that won the competition in 2010 and 2012.

Atletico said in a tweet: “The Atletico de Madrid family is in mourning. Our former player Jose Antonio Reyes has passed away. You will forever be in our hearts. Rest in peace.”

Reyes spent four years at Atletico after joining the club in 2007. The previous season he had helped Real Madrid win LaLiga during a season-long loan from Arsenal.

Reyes also helped Arsenal win the FA Cup and Community Shield during his time at the club, as well as reaching the 2006 Champions League final.

The Gunners said in a statement: “Everyone at Arsenal is devastated by the shocking news that our former player Jose Antonio Reyes has died in a traffic collision in Spain.

“Our thoughts are with all his family, friends and team-mates.

“Jose, who was part of the Invincibles team, was a hugely popular figure at our club and will always hold a special place in our hearts.

“He represented the club on 110 occasions, scoring 23 times and made memorable contributions to our 49-game unbeaten run.”

Henry tweeted: “I’m devastated to hear the sad news about Jose Antonio Reyes. Wonderful player, superb team mate and exceptional human being. I wish his family and friends continued strength and courage to get through this difficult time. #takenfartoosoon.”

Parlour added: “So Sad team mate of mine and great talent RIP Jose.”

England all in a spin once again as India seal the series 11:00
The story behind the amazing growth of women’s Gaelic football 10:12
Kilmacud Crokes and a 25-year boom in women’s football 10:00
Ulster’s new breed of backline boys can return silverware to Belfast 06:00
Gordon Elliott has ‘no complaints’ following one-year ban 09:13