Martin Glenn says any club guilty of doing so, “regardless of size”, will be punished

More English football players talk about their sexual abuse experiences as young boys, with one accusing clubs of covering up a paedophile ring. Video: BBC/Reuters 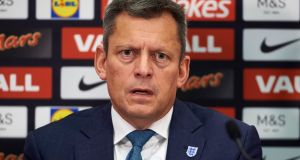 Football Association boss Martin Glenn believes it is unlikely there was an organised attempt to “cover up” sexual abuse in the game but has promised to punish any club found guilty of doing so “regardless of size”.

The FA chief executive was speaking at a news conference on the day it was revealed that a new, dedicated NSPCC helpline for football received 860 calls in its first week and 15 police forces around the country have confirmed they are investigating fresh allegations of historic abuse.

When asked about reports that some clubs may have paid off alleged victims in return for their silence on the matter, Glenn said this would be investigated by both the police and the FA’s independent review.

Sitting alongside newly-appointed England manager Gareth Southgate, Glenn said: “We’ve committed to a full review, shining the light on what happened in the past in football.

“We have clear rules in the game and if there’s any evidence of a breach of those — and hushing up would be one — subject to due process, the police need to be at the right place in this, when it’s our turn to apply the rules we absolutely will, regardless of size of club.”

When pressed on the possible existence of non-disclosure agreements and gagging orders, Glenn said: “I can’t say if there has been a cover-up in the game (but) I doubt it.”

Glenn’s comments come a day after the Daily Telegraph reported an allegation that Chelsea made a confidential payment to a former youth team player who accused the club’s ex-chief scout, Eddie Heath, of sexually abusing him.

The player is reported to have made the allegation, which relates to possible offences in the 1970s, in the last three years. Heath died before the allegation was made.

On Tuesday, the club issued a statement to say it has “retained” an external law firm to carry out an investigation into an individual employed by the club in the 1970s, who is now dead. It added that it would fully co-operate with the FA’s wider investigation but would make no further comment while those inquiries were ongoing.

Earlier that day, FA chairman Greg Clarke outlined the scope of the governing body’s investigation, which is being led by Kate Gallafent QC, and told reporters that he found the idea that any victim had been paid off to protect a club’s image as “morally repugnant”. FA head of equality and safeguarding Sue Ravenlaw added that it could also be illegal.

This point was picked up by Glenn today.

The former Leicester director said: “If there are restrictive contracts, through employment law, which prevent people from speaking out about a crime, because that’s what we’re talking about, then it must be dealt with.

“But the primacy needs to be sorted out: where does the police get involved, where does the FA? But the only way this gets dealt with is through openness and honesty.”

Around 350 victims have come forward to report child sexual abuse within football clubs, the National Police Chiefs’ Council has said.

The number comes from information supplied by forces across the UK to Operation Hydrant, set up in 2014 to oversee investigations into historical child sex abuse concerning prominent people, and referrals from the NSPCC helpline.

The NPCC said police forces across the country had received a “significant” number of calls, both reporting further allegations and offering information.

Chief Constable Simon Bailey, the NPCC’s lead for child protection, said the number of victims was “an indicative figure only”, and that with information still being collated numbers could change.

He said: “We are working closely with the Football Association to ensure that the response to this significant and growing number of victims, at all levels of football, is co-ordinated effectively.

“We continue to encourage those who have been the victim of child sexual abuse to report it, regardless of how long ago the abuse may have taken place.

“We will listen and treat all reports sensitively and seriously. Anyone with any information regarding child sexual abuse is also urged to come forward.

“When allegations are reported it enables police to assess whether there are current safeguarding risks and to ensure that appropriate action is taken to prevent children being abused today.”

Allegations of abuse are being recorded and investigated local to the area where each allegation was made, the NPCC said.

4 Joanne O’Riordan: Inspirational Press a winner in more ways than one