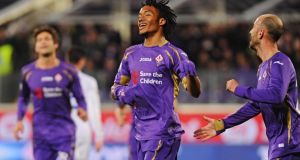 Fiorentina coach Vincenzo Montella has confirmed that Juan Cuadrado will not play for the Viola on Saturday, with the Colombian winger finalising his permanent move to Chelsea.

Cuadrado is expected to undergo a medical in London on Friday with Fiorentina’s permission after both clubs agreed a transfer fee for the 26-year-old.

Fiorentina are expected to receive €31 million and as part of the deal, Chelsea’s out-of-favour forward Mohamed Salah will be moving on loan in the opposite direction.

When asked about Cuadrado’s potential move to Chelsea, Montella told his club’s website on Friday afternoon: “It was a sale that had to be done.

“The club has done the right thing because we are also getting a very good player.

“Naturally, we need to understand how long he (Salah) will need to adapt to our football as it’s different from the English and Swiss leagues.

“From a defensive standpoint, Cuadrado guarantees us a lot more than Salah.

“Cuadrado is a player that has always arrived with a smile and given everything to Fiorentina.

“I am convinced that if he could have played tomorrow he would have.

“I’m happy for him because he is going to a big club. ”

Cuadrado joined Fiorentina in 2012 from Udinese and has been a regular in Montella’s side since.

The Colombian has scored four goals and set up four more in 17 league appearances for Fiorentina this season.

Cuadrado, who was one of the stand-out players alongside James Rodriguez for Colombia in last year’s World Cup in Brazil, was tied to the Viola until June 2019.

Fiorentina play at Genoa on Saturday.

The Florence outfit have qualified for the quarter-finals of the Coppa Italia and will take on Tottenham in the last 32 of the Europa League next month.