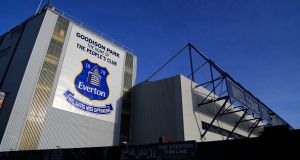 Everton are hopeful of staging the Merseyside derby at Goodison Park when the Premier League season restarts after requesting a meeting of the local safety advisory group.

Liverpool’s visit to Goodison on June 20th, when Jürgen Klopp’s team could win the club’s first league title in 30 years, was among several “high-risk” matches that Mark Roberts, the UK’s national football police chief, wanted switched to neutral venues amid concerns over demands on police and fans gathering outside stadiums.

Merseyside police, however, appeared to contradict Roberts on Friday by stating they had no objections to policing matches in Liverpool.

Everton and Liverpool oppose plans to make them play at neutral venues and the former have confirmed their intention to host the derby by formally asking the advisory group to convene the meeting.

That is standard procedure before a discussion that will comprise the clubs, supporter groups, Liverpool council, police and other emergency services plus the Sports Grounds Safety Authority.

The advisory group will recommend whether a safety certificate required to stage the game should be issued. The meeting is unlikely to take place until next week given the numerous bodies involved, with Premier League clubs convening on Thursday to discuss Project Restart protocols, including neutral venues.

While no games in London were included in the six fixtures that could take place on neutral venues, a decision is yet to be reached over whether teams in the capital will be permitted to stage derbies at their home grounds.

Sadiq Khan, the mayor of London, has expressed concern over the possibility of fans gathering outside stadiums and it remains to be seen whether the Tottenham Hotspur Stadium will be used for home fixtures against Arsenal and West Ham, who are also due to host Chelsea at the London Stadium.

A spokesman for the Metropolitan Police said: “The MPS have been in regular contact with Mark Roberts, who is coordinating the policing response to the restart of any football matches across the UK. Whilst agreement has been reached as to when the season may recommence, the plans for this to happen are still being finalised.

“We remain in contact with all the relevant bodies and will make plans as necessary when we receive a final proposed schedule for games.”

Holder shines with the ball as West Indies take control against England 19:23
Club rugby to start back from September 12th on regional basis 18:32
Katie Taylor out to banish all doubts in rematch with Delfine Persoon 17:56
Trick or treat: Ireland set for Halloween showdown with France in Paris 17:29
Tiger Woods to make PGA Tour return at Memorial Tournament 16:10