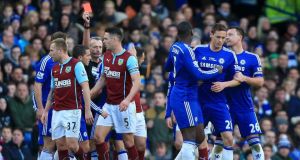 José Mourinho fears English football is in danger of losing its credibility with “people all around the world” perplexed as to how Nemanja Matic will miss tomorrow’s League Cup final through suspension while Ashley Barnes will be available for Burnley’s game against Swansea today.

The Chelsea manager, whose team attempt to win the first trophy of his second spell in charge against Tottenham Hotspur at Wembley, remains incensed to have lost the Serbian for two games after the midfielder pushed Barnes to the turf following the forward’s ill-timed tackle in last Saturday’s draw at Stamford Bridge.

Mourinho claimed the English Football Association’s decision not to sanction the Burnley player while Matic sits out a ban, albeit reduced from three games, will damage the English game’s reputation around the world.

“I have worked in so many different countries and I know what the Premier League – what English football – means in every country,” he said.

“The dimension of the Premier League: not just the audiences and the millions of people who watch, but the feeling and envy they have for English football . . . the respect and credibility.

“For example, in a very important newspaper in my country, after the Burnley game the headline was: ‘We thought this was only possible in Portugal, never in England,’” Mourinho claimed.

“But, step by step, people are affected. These words were not just in Portugal. They were everywhere.

“We must take care of our football. I’m not English but I have worked here a long time and I have to believe it belongs to me.”

“I don’t think you can have any doubt that all around the world people open their mouths with surprise at how this can be possible.”

Chelsea had launched an appeal against Matic’s initial three-match ban for violent conduct on the basis of excessive punishment in the hope the suspension would be reduced to one game, only for an independent regulatory commission to reduce the ban to two matches.

The club subsequently released a statement confirming they were “appalled” at that decision and suggesting more must be done to protect players. Guardian Service

1 Seán O’Brien: Anger over my parents’ break-up never left me
2 Will Connors chops his way to the front of Ireland’s openside queue
3 Madness or defiance? The GAA is taking a huge gamble in staging Championships
4 Munster earn bank holiday bonus in entertaining Thomond Park tussle
5 Gibson-Park, Earls and Kelleher all in race to make Ireland’s French finale
Real news has value SUBSCRIBE