English are the ‘masters’ of diving says Arsène Wenger 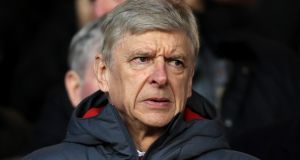 Arsenal manager Arsene Wenger: “I must say the English players have learned very quickly and they might even be the masters [of diving] now.” Photograph: Dimitris Legakis/EPA

Arsène Wenger contemplated the great diving debate and could not resist a loaded joke before Saturday’s north London derby.

“I remember there were tremendous cases here when foreign players did it but I must say the English players have learned very quickly and they might even be the masters now.”

On the back of a contentious match last Sunday when Tottenham’s Dele Alli was booked for simulation and Harry Kane accused of diving by Liverpool’s Virgil van Dijk, Wenger insisted that the issue needs attention.

“We have to get diving out of the game,” he said. “I don’t tell my players to dive. I don’t encourage them to dive at all. You want your players to be intelligent. Sometimes they have played a little bit with the rules, they make more of it on the penalty case. Every striker will do that.

Arsenal face Tottenham at lunchtime at Wembley, a venue where Wenger’s team have won their past nine matches including three FA Cup finals.

“It is a big game because we are behind in the table and we have to catch up,” he said. “It’s more importantly mathematically for us to come back as quickly as possible, rather than it being emotionally charged.”

Wenger is confident that a contract renewal for Jack Wilshere will be agreed soon, following on from the extension signed by Mesut Özil. The England midfielder, who has been at Arsenal since the age of nine, has a few months left on his current deal.

Tottenham are unbeaten in 11 games, and victory at Wembley this weekend would leave Arsenal with a mountain to climb to finish in the top four.

Pochettino has not given up hope even of pipping Manchester United to second. “Yes, I believe [we can finish second]. I’m a person that believes and of course we’re going to fight for that to happen. The gap [seven points] is not massive but it will be tough.”

Toby Alderweireld could start against Arsenal after playing 90 minutes against Newport, which was his first appearance since November 1st, while January signing Lucas Moura is set to be involved for the first time.

“I think he will be ready to be in contention for Saturday,” Pochettino said. “He is starting to feel the legs. I feel we need to assess him tomorrow but after the last session tomorrow I hope we can put him in contention.”

Alderweireld has declared himself ready to face Arsenal.

Alderweireld was out for seven weeks last season with a separate knee problem and during both absences, Tottenham missed their main centre-back.

“This has been the longest ever [lay-off] , it was a little bit unfortunate there was a tear in the tendon, not only the muscle, and it just takes time,” he added.

“We had to do that time and work very hard. It’s difficult. It was a proper hamstring injury and the risk of retearing it was very big.

“That’s why we took our time and worked very hard so my muscles are ready for this type of game and to play a lot of games again.”

Alderweireld’s return is timely given, after Arsenal, Tottenham face a trip to Juventus in the Champions League next week before the return leg at Wembley early next month.

Starting Alderweireld against Arsenal would not be without risk, particularly given Arsene Wenger’s side now have the razor-sharp Pierre-Emerick Aubameyang in their ranks.

Alderweireld has already faced Aubameyang when Tottenham beat Borussia Dortmund 3-1 in September, and while the striker drew a blank that day, he scored in both of Dortmund’s Europa League wins over Spurs in 2016, games the Belgium international also played in.

“He’s very quick, he’s a good finisher, he has it all,” Alderweireld said. “He is in a good moment now as well so it’s going to be very difficult to beat him but I think we will be ready for it.

“You have to work your mind. One against one, on the same line, he will beat you, so you have to be very clever, you have to read the situation and try to beat him with your head.” – Guardian