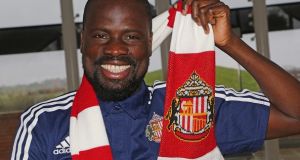 Sunderland’s Emmanuel Eboué has received notice that his short-term contract with the club will be terminated after Fifa handed the player a one-year ban. The sanction was handed out after the player failed to pay his former agent amid a dispute.

The 32-year-old Ivorian defender, who only signed for the club as a free agent on 9 March, was banned by Fifa’s disciplinary committee after a protracted saga involving non-payments to his former representative Sébastien Boisseau.

In a statement, Sunderland said: “Sunderland AFC has been advised by the Football Association that Emmanuel Ebouéhas been placed under an immediate suspension from football and all football-related activity for a period of one year, by Fifa.

“The suspension relates to a monetary dispute which precedes his time at Sunderland AFC and was not something that the club was made aware of by the player.

“Eboué signed a contract with Sunderland AFC until the end of the current season and the club has therefore given notice of its intention to terminate the contract. The player has two weeks in which to appeal this decision.”

The case was heard by the Court of Arbitration for Sport but Eboué’s appeal was dismissed and Fifa has now ordered that the ban be imposed for a year, or as long as it takes the former Arsenal full-back to settle the debt with Boisseau.

According to the governing body, Eboué was originally ordered to pay the undisclosed amount in July 2013, then fined SFr30,000 (€27,400) in September 2014 for failing to comply with the decision and given four months to settle the debut.

Even if Eboué’s appeal against the termination of his contract is successful, any ban could see his short-term contract expire at the end of the season without the player having featured for the club.