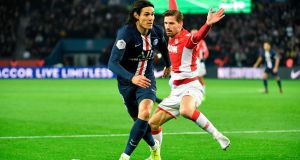 Chelsea have been dealt a blow in their search for attacking reinforcements after Edinson Cavani’s father said the striker will join Atlético Madrid if the Spanish club can agree a deal with Paris Saint-Germain.

Frank Lampard wants Chelsea to sign Cavani but it is understoodthe Uruguayan has already agreed an 18-month deal worth €10m (£8.5m) a year with Atlético, who are locked in negotiations with PSG over a fee for the 32-year-old. Cavani, who is out of contract at the end of the season, has fallen down the pecking order at PSG this season and has made it clear he wants to secure a move to Diego Simeone’s side this month.

Atlético are confident of signing Cavani, even though Chelsea are desperate to find quality cover for Tammy Abraham this month, and the Uruguayan’s father has urged PSG to let him leave now rather than make him wait until he is able to depart on a free transfer in the summer. Reports have claimed the French club are holding out for at least £15m for the former Napoli player. Lampard, who saw Abraham limp off with an ankle injury during Chelsea’s 2-2 draw with Arsenal on Tuesday night, remains hopeful of capitalising on Cavani’s unhappiness.

“He wants to join another club in Europe,” Luis Cavani said. “It would please me that he plays here [at Atlético]. Simeone wants him now [in January but] the head coach of Paris Saint-Germain [Thomas Tuchel] has also said he needs him to help compete in the Champions League.

“I think there is a strong chance he will go to Atlético. The option to join the club always remains in June. There are lots of other clubs but when you give your word to a team, you respect it. If tomorrow, if he is available and Atlético still want him, I think he will sign. He is a player who needs time to play and today, he only plays four or six minutes per game. PSG are treating him unfairly.”

Cavani’s mother has also weighed in on her son’s future. “It’s complicated but he wants to play at Atlético and if it’s not now, in the summer,” Berta Gomez said. “We have been eager for some time but it doesn’t depend on my son but on PSG and Atlético Madrid. We understand their position but what we don’t understand is that they want him to stay and then they only bring him out for six minutes. They are not treating him well considering what he has given to PSG in the almost seven years he has been there.”

Lampard is desperate to improve his attacking options and Chelsea’s manager signalled his interest in Cavani before the draw with Arsenal. “He’s a great player,” Lampard said. “I played against him and I always loved his mentality. Obviously his goalscoring record speaks for itself. I’m not absolutely aware of what the situation is, so we’ll see. The idea of bringing in experience is something I’m not absolutely looking away from. Sometimes the young players need a little bit of help.” – Guardian

1 Keith Duggan: Through the glories and the disgraces, we were all Maradona addicts
2 Rugby Stats: Blame game at lineout time is on the whole team
3 GAA Statistics: Can Cavan and Thomas Galligan beat Dublin with the long kickout?
4 Andy Farrell to delve deeper into Irish squad for team to play Georgia
5 Handful of God: Five magic Maradona moments
Real news has value SUBSCRIBE