Is this a title challenge? It wouldn’t be in anything resembling a normal season 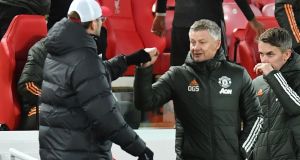 What does it mean? What does any of it mean? Manchester United’s 0-0 draw at Liverpool on Sunday means they remain top of the Premier League table one game before they reach their halfway point, but they’ve now played each of the other Big Six sides, plus Leicester whose consistency over the past five years perhaps affords them associate membership of that group, and they haven’t beaten any of them. Is that a title challenge? Perhaps it is, but it wouldn’t be in anything resembling a normal season.

United, at least, offer some predictability in an unsettling world. The only side to whom they’ve dropped points this season other than the Big Six Plus Leicester is Crystal Palace, but that was their first game, and a lot of sides who had played in Europe in August looked undercooked to start with. But since then the pattern has been very clear: United beat mid-table sides and lower, and they don’t beat those likeliest to join them in the top seven at the end of the season.

Given United went out of the Champions League after defeats to Paris Saint-Germain and RB Leipzig, a startling conclusion begins to emerge: they get better results against weaker teams than good ones.

Since the arrival of Bruno Fernandes almost a year ago, United have had far more creative bite, while the introduction of Edinson Cavani in October has added intelligence of movement and sharpness in the box. United’s squad is still far from perfect, but it is far more coherent than it has been probably at any point since Alex Ferguson left.

But that has gone hand in hand with a comparative lack of effectiveness against better sides. Ole Gunnar Solskjær’s programme of 90s revivalism has moved beyond comebacks after an early concession to the reintroduction of the 0-0 draw. That’s three now this season but where the six José Mourinho achieved in 2016-17 was evidence of a lack of attacking flair, this season they have come dressed in a more positive light (and not just because none yet have been against West Brom or Burnley).

The policy seems not to have changed since last season. United sit deep against better sides, look to draw them on and strike on the break. That is the one thing even Solskjær’s harshest critics accepted he was good at. As Louis van Gaal – with his very specific ideas about the moral righteousness of possession – keeps reminding us, it’s still the basis of how Solskjær plays.

As to why that’s not bringing the results it did last season, the answer would appear twofold. On the one hand, opponents mindful of the recent past, are perhaps offering Solskjær more respect. Manchester City, who lost three times to United last season, were certainly warier in the league game last month. But also football as a whole has retrenched.

The disrupted calendar means teams have neither the energy nor the preparation time to press with the same intensity that they did before the pandemic. Everybody is sitting deeper. There is a general conservatism. After the wildness of the first month of the season, goals per game will dip below last season’s average if Arsenal and Newcastle draw 0-0 on Monday night.

Certainly Liverpool, once their Thiago Alcântara-inspired storm had blown out, seemed to settle for a point relatively early on Sunday. In the final hour of the game, it was United who had the better chances. What was striking, though, was not only the efforts Fernandes and Paul Pogba had saved in the last 20 minutes, it was how often United threatened to get in behind Liverpool, particularly towards the end of the first half.

United were caught offside seven times in that first half, for which it’s not unreasonable to credit the discipline of Liverpool’s line. At the same time, though, Marcus Rashford was a little over-eager in making his runs, the result perhaps of the adjustment from playing wide to through the centre.

All of which means what, precisely, for United’s title challenge? (And it is one, however unexpected: no side within a couple of points of the top at the halfway stage, as United are certain to be, can be said not to be in the race). Nobody, surely, can win a league just by relentlessly beating the bottom two thirds of the table?

And that perhaps comes back to the central doubt about Solskjær. He can set sides up to sit deep and play effectively on the break. Quality of player will overcome lesser sides (and none of the recent wins over Burnley, Aston Villa and Wolves were emphatic). But can he structure an attack to get the better of a high-class opponent prepared to defend against him? Of that there remains scant evidence.

Does that matter? Perhaps not: in this very odd season, precedents matter little. But City’s mounting form and the way they dismissed United in the Carabao Cup semi-final suggest at least one element of normality is returning. - Guardian

Manchester City go 15 points clear; Gordon D’Arcy on what we can learn from Italy win 07:36
Gordon D’Arcy: Ireland merely picked through the carcass of Italian rugby 06:00
Munster looking to drive home their advantage on Thomond Park run-in 06:00
Brian O'Connor: Elliott revelations leave racing’s good name in state of disrepute 06:00
For a young one obsessed with football, Gregory’s Girl was heaven 06:00