Debutant Rayan Aït-Nouri shines as Wolves up to third 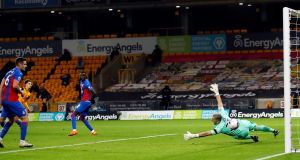 Wolves have progressed in every season under Nuno Espírito Santo and look well set to continue that trend. Crystal Palace were certainly unable to stall them here, as they were comprehensively beaten by effervescent hosts whose goals came from the excellent Daniel Podence and an equally impressive teenage debutant, Rayan Aït-Nouri.

The visitors ended up ragged and unhappy, and Luka Milivojevic was sent off late on for a studs-up tackle on Joâo Moutinho. And thus, despite some recent growing pains, Wolves have made their best start to a top-flight season since 1979-80.

It has been a discreetly impressive campaign so far for Wolves, where Nuno has declared his ambition to build the club this season by cultivating a more dominant style of play and greater squad depth. That latter quality was demonstrated here after the manager chose to give a debut to Aït-Nouri, the 19-year-old left wingback who joined last month on loan from Angers.

Adama Traoré began on the bench for the fourth league game in a row, with the manager again putting his trust in a front trio of Podence, Pedro Neto and Raúl Jiménez. Only the Mexican had proven to be a consistent scorer but the other two came into this game on the back of several promising displays that helped to create a sense that Wolves were close to clicking. They soon confirmed that impression.

Palace, too, had enjoyed an encouraging start, particularly on their travels. Wolves knew to be wary of the visitors’ counterattacking prowess.

But Palace made a bold start, Townsend nimbly working an opening for Wilfried Zaha, who fired wide from the left-hand corner of the area. Wolves were quick to retort, dispatching a series of dangerous crosses that Palace defended well until the seventh minute, when Podence connected with Leander Dendoncker, who headed wide from 10 yards.

Wolves began to stretch the visitors with crisp and expansive passing. The busy Podence threatened again in the 10th minute, when he tried to curl a shot from the left-hand angle of the box into the far corner of the net. Vicente Guaita tipped it over the bar. Willy Boly should have tested the goalkeeper again moments later but failed to meet a corner with a clean header from six yards. That was a disappointing miss but such was the verve with which Wolves were playing that a breakthrough before half-time looked imminent, which would be a welcome development for a side that had not scored a first-half goal since their opening match of the season.

Aït-Nouri’s strike turned out to be well worth waiting for. Podence set it up with a dash down the right and cross that Cheihkou Kouyaté could not cut out, then the young Frenchman ran on to the ball at the left-hand corner of the box and fizzed a shot into the bottom corner. It was a teenage kick to celebrate in song, if there had been any fans in attendance.

Wolves were far from sated. Dendoncker crashed a shot against the post from 25 yards before Podence got the goal that he, in particular, deserved. This time the run and cross from the right came from Neto, who left Podence with the straightforward task of guiding a shot into the net from six yards. Palace were being schooled.

The visitors rebelled sufficiently to give Wolves a scare in the 36th minute, when Conor Coady did well to block a back-post header from Scott Dann following a corner. Boly then enjoyed a happy escape when, owing to an offside, VAR overturned a penalty against him.

Palace began the second half on the attack, Townsend forcing a tricky save from Patrício with a volley from the edge of the box. As they continued to push the hosts backwards, Zaha was aghast not to be given a penalty after going down under a combined challenge Aït-Nouri and Max Kilman. The referee deemed it another well-timed intervention by a defence that repeatedly blocked and thwarted the best the visitors could muster.

Then Zaha had reason to be thankful to the referee, who decided that a yellow card was punishment enough after the forward, frustrated at being dispossessed, raised hands to Aït-Nouri. The teenager did not seem intimidated. - Guardian