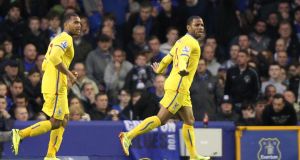 A victory created in south-east London, cherished in north London. Crystal Palace shattered Everton’s seven-game winning streak, their run of nine successive victories at Goodison Park and quite possibly their Champions League aspirations with a model away performance effectively to secure their Premier League status. Tony Pulis’s rescue act is complete. Arsène Wenger can sense a reprieve of his own.

Everton would have reclaimed fourth place from Arsenal with just a point but Champions League qualification is out of their hands after Palace recorded a fourth successive victory and arguably their finest of the campaign at Goodison. Jason Puncheon and Yannick Bolasie were inspired down the visiting flanks, Scott Dann and Damien Delaney rocks in defence, and Puncheon, Dann and Cameron Jerome scored the goals that took Palace to the 40-point mark. Brendan Rodgers, the Liverpool manager, looked on. He will know there are no guarantees when his league leaders head to Selhurst Park for their penultimate game of the season.

Roberto Martinez had described Palace as the “best defensive set-up in the league” since Pulis replaced Ian Holloway and Everton’s starting XI reflected their manager’s concern, with the strength and solidity of James McCarthy sacrificed for even greater flair than usual. The deployment of Ross Barkley behind a four-man attack led by Romelu Lukaku, however, struggled to find a way through two solid banks of four and the visitors showed resilience was not their only forte when they took the lead midway through the first half. Anxiety consumed Goodison Park when Puncheon scored his fourth goal in three games and was transmitted into Everton’s performance.

The 25th anniversary of the Hillsborough disaster was marked before kick-off by a minute’s applause from both sets of supporters and some nice touches from Liverpool’s local rivals. Children held a row of entwined blue and red scarves the length of the pitch, reviving memories of a similar show of unity at Goodison before Liverpool’s first competitive fixture after the tragedy in 1989. Martínez, who delivered an emotive speech at the memorial service at Anfield on Tuesday, turned to face Margaret Aspinall and other invited members of the Hillsborough Family Support Group in the Goodison directors’ box during the applause.

His side quickly settled into a confident passing rhythm with the marauding runs and accuracy of John Stones out of central defence a prominent feature. Gareth Barry headed over from an early Aiden McGeady corner while Gerard Deulofeu’s individual duel with the Palace left-back Joel Ward offered promise – but little end product – for the home side.

Palace were content to absorb Everton pressure and strike on the counter, and did so to devastating effect when the impressive Bolasie burst past Leighton Baines inside the area. His cross deflected to Marouane Chamakh on the penalty spot and he teed up Puncheon for a confident low finish into the bottom corner of Tim Howard’s goal. It could have been much worse for Everton shortly afterwards when Bolasie again provided an unexpected threat. Controlling a high ball on his chest, the midfielder cut inside Séamus Coleman and struck a venomous shot against the base of the post from 25 yards. Cameron Jerome steered an awkward rebound wide.

All Everton had to show for dominant first half possession was half-chances for Kevin Mirallas and Lukaku, the latter forcing a fine save from Julian Speroni at his near post, and their night did deteriorate when Palace scored a second moments after the restart.

Martinez’s patience with Deulofeu lasted until the interval but his replacement, the in-form Steven Naismith, barely had time to break into a run before he was helping to chase a two-goal deficit. Only a commanding save from Howard prevented Joe Ledley scoring from 12 yards but, from the resulting corner by the influential Bolasie, there was no reprieve for Everton as Scott Dann escaped the attention of Stones and steered a textbook header into the roof of the net.

Goodison could see its Champions League dream disappearing over the horizon of the Emirates and Martinez acted, introducing McCarthy and Leon Osman. The impact was immediate on Everton’s balance, control and composure. Within two minutes Barkley sprayed the ball out to Mirallas wide on the right. His deep, searching cross was headed back across goal by Baines of all people and there was Naismith to prod home his third goal in four matches from a yard out.

Mirallas volleyed over from a Baines cross and Speroni saved superbly from Osman as Everton stirred. But they were punctured by Puncheon yet again with 17 minutes remaining when the on-loan Southampton midfielder cut across the Everton defence and picked out Jerome inside the area. The striker made himself a yard of space and swept an emphatic finish into the far corner. Mirallas converted Barkley’s deflected pass in the 86th minute but, despite six minutes of added time, the draw was beyond Everton. Advantage Arsenal.