Cristiano Ronaldo: I left Real because of president Pérez 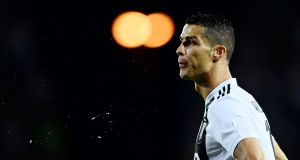 Cristiano Ronaldo believes the Real Madrid president, Florentino Pérez, only ever saw him as a means of making money and has said the deterioration of their relationship convinced him to call time on a glittering nine-year spell at the club.

The forward, who joined Juventus for around €100m in July, departed Spain as Real’s all-time leading goalscorer having helped inspire the club to 15 major trophies, including four Champions Leagues and two La Liga titles. In an interview with France Football he was damning of Pérez.

“He only ever looked at me as a business relationship,” he said. “I know it. What he told me never came from the heart.”

The club has claimed Ronaldo’s transfer was instigated “at the will and the request of the player”. The Portugal international suggested Pérez’s attitude towards him had changed.

“I felt it inside the club, especially from the president, that they no longer considered me the same way that they did in the start,” he said. “In the first four or five years there, I had the feeling of being ‘Cristiano Ronaldo’. Less afterwards. The president looked at me through eyes that didn’t want to say the same thing, as if I was no longer indispensable to them, if you know what I mean.

“That’s what made me think about leaving. Sometimes I’d look at the news, where they were saying I was asking to leave. There was a bit of that, but the truth is that I always had the impression that the president would not hold me back. If it had all been about money, I’d have moved to China, where I would have earned five times as much than here [at Juventus]or at Real. I did not come to Juve for the money. I earned the same in Madrid, if not more. The difference is that, at Juve, they really wanted me. They told me that and made it clear. They showed me that.”

Asked whether the manager Zinedine Zidane’s decision to leave after overseeing a third successive European Cup win had influenced his move, Ronaldo said: “My decision to leave was not based on his departure. That being the case, it’s one of those little things that made me feel a bit better in terms of what I thought of the situation at the club.”

The 33-year-old, who scored 44 goals for Madrid last season and has seven for Juventus, is aiming to win the Ballon d’Or for a third year in a row. “I think I deserve it this year … Yes, I dream of winning the Ballon d’Or for the sixth time and passing, in this case, Lionel Messi. ”

Ronaldo is the subject of a criminal investigation by Las Vegas police and a separate civil action after an allegation of rape made against him by Kathryn Mayorga. He strenuously denies the allegation, which Mayorga, now 34, claims took place in the summer of 2009.

She alleges the footballer assaulted her in a Las Vegas hotel in 2009, then used “fixers” to stop her pursuing criminal charges – including paying her $375,000 “hush money”. Police confirmed the original case was closed in 2009 due to Mayorga not disclosing details but it was reopened in September after she went public, inspired, she said, by the #MeToo movement.

“Of course, this story is interfering in my life,” Ronaldo said. “I have a partner, four children, an ageing mother, sisters, a brother, a family with whom I am very close. Not to mention my reputation, which is that of someone exemplary ... Imagine what it means when someone accuses you of rape, whether you have all that or not. I know who I am and what I did. Truth will out one day. And the people who criticise me or seek to expose my life today, who make it into a circus, these people will see.”

He added: “I explained to my partner. My son, Cristiano Jr, is too young to understand. It’s worst for my mother and my sisters. They are stunned, and at the same time very angry. This is the first time I have seen them in this state.”