Costa gets Chelsea back on track against Aston Villa 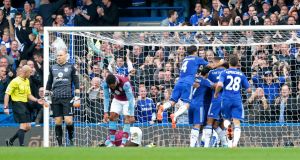 Costa returned from suspension to score one and force another as the Premier League champions won 2-0 and their fans sang “we are staying up” — something which cannot be said with any certainty of Sherwood’s Villa.

Mourinho was the subject of the first managerial vote of confidence of Roman Abramovich’s 12-year ownership following the October 3 loss to Southampton, which left the Blues 16th.

And the Russian billionaire was present as the Villa clash began with the home crowd voicing their support for the self-proclaimed Special One.

Mourinho laughed that Costa had “found the reasons for the bad results” — and maybe the striker named himself as the solution before his return from a three-match absence for violent conduct.

Costa was a nuisance against Arsenal, his most recent match, but scarcely needed to be against Villa, who were responsible for their own undoing.

Brad Guzan’s woeful clearance and Joleon Lescott’s poor control allowed Willian to nick in before he centred and Costa netted his third of the season.

If Chelsea had not had much luck to date, as Mourinho has said, they received more good fortune when a Costa shot looped in off Alan Hutton to complete the victory.

The visiting congregation had lauded Sherwood, who was appointed in February and responded with applause, but it is clear Villa are in trouble.

Villa were just the visitors Chelsea were hoping for in the midst of their crisis, having had one win in 13 prior league games at Stamford Bridge while conceding 30 times in the previous eight visits.

They were equally as accommodating on this occasion after an open start when they looked as likely as Chelsea to score.

Ruben Loftus-Cheek, making his first league start, was deployed out of position in the advanced ‘number 10’ role, with Cesc Fabregas deeper.

Loftus-Cheek fluffed one pass intended for Costa and next saw a deflected shot bobble wide.

Hutton next benefited from a slip by Baba Rahman, whose first league start was hardly memorable, before firing into the feet of Asmir Begovic.

Villa’s best chance fell to Rudy Gestede, who scooped Jordan Ayew’s cross over with the outside of his right boot.

Guzan had looked uncertain with the ball at his feet and Willian reacted quickest when the goalkeeper’s pass put Lescott under pressure. It was a simple finish for Costa.

The striker next wanted a penalty when charging through between Kieran Richardson and Lescott, but referee Roger East ignored his appeal.

There was no reaction from a seated Mourinho, who is appealing against the #50,000 fine and suspended one-match stadium ban meted out by the Football Association after he said referees were “afraid” to give Chelsea a penalty in the wake of the Southampton loss.

Nemanja Matic was sent on at half-time for Loftus-Cheek and lasted longer than the 28 minutes he did as a half-time substitute against Southampton.

Fabregas was pushed further forwards and played a diagonal pass to Costa, who ran at Richards and Hutton before a shot ricocheted in off the Scot.

Costa might have had his second but mis-timed his leap to meet a Fabregas cross.

A Grealish foul on Cesar Azpilicueta prompted a frank exchange between coaches Rui Faria and Mark Robson, while Costa was involved in minor altercations with Richards and Ashley Westwood as the clock wound down in a welcome routine home win.