Christian Benteke frustrated at being ignored by Jürgen Klopp 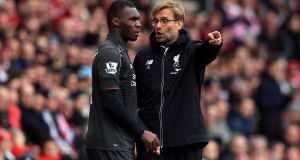 Liverpool manager Jürgen Klopp speaks to Christian Benteke as he prepares to come on during the Premier League defeat to Southampton at St Mary’s on Sunday. Photograph: PA.

Christian Benteke appears to have accelerated his likely departure from Liverpool this summer by questioning why Jürgen Klopp “ignores” him.

The Belgium forward has scored just eight goals in 35 appearances since joining Liverpool from Aston Villa for £32.5m (€41m) in July and has rarely featured under Klopp, who replaced Brendan Rodgers as manager in October. Benteke has made just five starts in 16 matches since the end of December and scored just two goals in that time.

SouthamptonMatch of the DayAlan Shearer

Klopp has played down the incident and said previously that Benteke is part of his long-term plans, but the 25-year-old clearly does not share that view if his interview with Belgium’s Sport/Voetbal magazine is anything to go by.

“Some team-mates have said that I was lucky with the arrival of Klopp, because I certainly would play,” Benteke is reported to have said. “When your coach says he wanted to take you to [Borussia] Dortmund and a little later you sit at the same club and he ignores you it is hard to understand.

“I find it bizarre, I do not understand why people say that [I am ill-suited to Klopp’s style of play]. I can play pressing and moving a lot. It is not that we play in the Barcelona style.”

Benteke, whose contract with Liverpool runs until June 2020, has been linked with a move to West Ham in the summer, with the London club’s co-chairman David Sullivan publicly confirming they are monitoring the player, who scored 49 goals in 101 games for Villa having arrived there from Genk in 2012.

“In January I didn’t want to leave and it’s still my desire to succeed at Liverpool. We’ll see at the end of the season,” said Benteke, who is currently with a Belgium squad dealing with the aftermath of Tuesday’s terrorist attacks in Brussels.

Benteke’s club and international team-mate Simon Mignolet has offered him support. “Everyone knows his qualities,” the goalkeeper told Belgian TV station Sporza. “When you’re a footballer you want to play in all the matches and it’s not easy when you’re on the bench. He’s continuing to work hard at training and for his place. He does his best every day.”