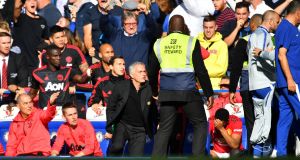 Chelsea’s assistant coach Marco Ianni has been charged with improper conduct following the chaotic scenes that marked the closing stages of the 2-2 draw with Manchester United at Stamford Bridge on Saturday.

Ianni twice goaded José Mourinho following Ross Barkley’s 96th-minute equaliser for the hosts, leading to the United manager having to be held back by stewards as he attempted to chase the Italian down the tunnel.

Mourinho has avoided a charge from the Football Association for his role in the incident and has instead been reminded of his responsibilities. That is also the case for Chelsea and United in general, with both clubs receiving similar reminders about the behaviour expected of their staff and players while in the technical area

“In relation to this incident, charge Mourinho has been formally reminded of his responsibilities, whilst both clubs have received similar official reminders in terms of the behaviour expected of their staff and players at all times whilst in the technical area.”

As reported by the Guardian on Sunday, a range of warnings as opposed to widespread charges was set to be the likely response from the FA to what took place at Stamford Bridge given the governing body’s view that the matter had been dealt with on the day, by the referee Mike Dean, his officials and both clubs.

That has not stopped the FA charging Ianni, however. The Italian, who previously worked with Chelsea manager, Maurizio Sarri, at Napoli, apologised to Mourinho straight after the game, something the United manager accepted before claiming Ianni’s actions were down to “bad education”.

The lack of a charge will come as a relief to Mourinho given he is dealing with an existing FA charge for allegedly using improper language following United’s 3-2 victory against Newcastle United before the international break. The 55-year-old has until 6pm on Wednesday to respond having originally been asked by the FA to do so by the same time on Friday. – Guardian service