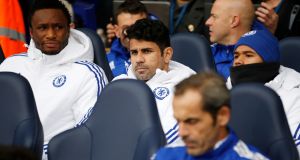 Chelsea’s Diego Costa sits on the bench before the match against Tottenham. Photograph: Paul Childs/Reuters

Diego Costa is expected to return to the Chelsea starting lineup for the Premier League game against Bournemouth on Saturday despite making his frustrations clear at being dropped to the bench for the draw at Tottenham.

The striker, who had previously been selected when fit, was an unused substitute on Sunday despite the champions not having another centre-forward in their squad. He opted out of the pre-match warm-up and post-match warm-down, and lobbed his pink bib in the direction of the manager as he returned to his seat in the dugout.

Chelsea do not intend to impose any internal disciplinary action on Costa for that apparent show of petulance. But, after his angry clash with Jose Mourinho on the stroke of half-time during the Champions League match in Haifa last Tuesday, they will monitor his attitude closely in training to be sure he is in the right frame of mind to return to the starting line-up.

The players were given a day off on Monday but will report back on Tuesday to begin preparations for Bournemouth.

Costa’s team-mate, Branislav Ivanovic, expects a positive reaction from the 27-year-old after the striker followed every other key player in finding himself demoted to the bench in what has been a difficult title defence for Chelsea.

Costa is the only one of the senior players to have made his displeasure at being demoted publicly obvious, even if Mourinho – who was without Radamel Falcao and Loic Remy at Spurs – has suggested he was encouraged to see Costa’s frustration at life on the sidelines.

“It’s about the team. Diego didn’t play at Tottenham but I know he’ll be ready for the next game. He scored against Norwich – the winning goal – but it has to be all about the team in the moment.

“I think we all have to think about that. Sometimes, for a player who isn’t playing, it’s difficult but it is a normal situation for the club.”

Chelsea, who did not punish Costa for returning to pre-season overweight, are expected to strengthen up front over the next two transfer windows, though they may have to wait until the summer to secure their long-term targets.

The recruitment department, headed by the director of football, Michael Emenalo, is scrutinising potential recruits, such as West Brom’s Saido Berahino and Leicester’s Jamie Vardy, as well as Antoine Griezmann and Alex Teixeira, and a decision will be made early this month as to how to proceed. Guardian Service