Chelsea reject Inter offers for Kanté, including Eriksen in part-exchange 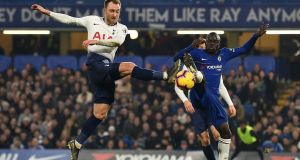 Christian Eriksen and Chelsea’s N’Golo Kante battle for the ball during a Premier League game in February 2019. Photograph: Glyn Kirk/AFP via Getty Images

Chelsea have rejected an offer for N’Golo Kanté from Inter Milan that included Marcelo Brozovic and have told the Italian club they are not interested in a deal involving the former Tottenham midfielder Christian Eriksen.

Antonio Conte has made Kanté a top target and Inter, who do not have a big budget, are weighing up whether to continue their pursuit of the midfielder. Conte will have to raise funds through player sales if he wants to make a straight cash offer.

Inter were left disappointed after testing the water with a part-exchange offer including Brozovic, the 27-year-old Croatia midfielder. Chelsea are not in a rush to sell Kanté, even though injury problems restricted him to 28 appearances last season, and are not interested in Brozovic.

Frank Lampard said in June he wanted to keep Kanté and Conte knows it will not be easy to prise the France international from his old club. Kanté shone after being signed by Conte for Chelsea four years ago, helping the Italian win the Premier League in 2017, but reports in France have suggested he is happy at Stamford Bridge.

Inter, who signed Aleksandar Kolarov from Roma this week, also asked Chelsea whether they would be interested in Eriksen as part of a deal for Kanté or in a straight transfer. The Dane has struggled since leaving Tottenham for £18 million in January and Chelsea are not in the market for attacking players after spending heavily on Kai Havertz, Timo Werner and Hakim Ziyech.

There remains a slight possibility Chelsea could be tempted into selling Kanté for the right price. They are close to signing the Rennes goalkeeper Edouard Mendy and are then expected to target the West Ham midfielder Declan Rice. However Lampard would favour selling Jorginho rather than Kanté.

Lampard has said Chelsea’s spending spree does not automatically mean they will challenge for the title. Chelsea have been busier than many of their rivals in the market, spending more than £200 million on Ben Chilwell, Havertz, Malang Sarr, Thiago Silva, Werner and Ziyech. However Lampard believes his team need time to develop before they are capable of catching Liverpool and Manchester City.

“I’m not interested in other people,” he said. “Other people can talk about whether we challenge or not. We finished a lot of points behind Liverpool and Manchester City in the last two seasons, as has everybody else; that’s the way that the league has gone. We have to first look at closing the gap, and build confidence, by getting the team working well together. I’m not jumping ahead and making any predictions.

“I hope Chelsea fans are excited because I am not going to lie, we have brought in a high level of player that we feel will improve our squad. At the same time, I also know what it takes to win Premier League. I know expectations will be there. I won’t hide away from that. My expectations are on a different level from last year because we are in a different situation. We want to improve but we won’t jump too far ahead of ourselves.”

Chelsea have loaned Michy Batshuayi to Crystal Palace but Lampard played down suggestions Fikayo Tomori could join Everton on loan. He said the defender was in contention to play at Brighton in his team’s opening game on Monday. Chilwell and Ziyech are unavailable and Silva is a doubt after only just starting training.

Meanwhile, West Ham have made a £30 million bid for James Tarkowski after having their first offer for the Burnley centre back rejected. David Moyes is keen to strengthen his leaky defence and is determined to sign Tarkowski following the controversial sale of Grady Diangana to West Brom. West Ham’s manager is a big admirer of the 27-year-old and hopes to convince Burnley to sell after having an initial offer of £27 million turned down.

Although Tarkowski is pushing for a move, it is understood Sean Dyche is relaxed about the situation. Burnley’s manager warned this week that Tarkowski would not be sold “on the cheap” and the club could hold out for as much as £50 million for the former Brentford player.

West Ham are under pressure to strengthen their squad after allowing Diangana to go for £18 million. The 22-year-old winger’s departure has gone down badly with his former team-mates. Mark Noble, West Ham’s captain, tweeted that he was “angry and sad” after the academy graduate’s move was confirmed.

West Ham argue they needed to raise their transfer budget through sales and have promised the money for Diangana will be reinvested in the squad. West Ham, who host Newcastle in their opening Premier League game on Saturday, conceded 62 goals last season and lost 5-3 to Bournemouth in a friendly last weekend.

Tarkowksi is keen to leave Burnley to boost his chances of winning back a spot in the England squad. Leicester have also shown an interest in Tarkowski.

Fulham have signed the Netherlands right back Kenny Tete from Lyon for an undisclosed fee. The 24-year-old has a four-year deal, with the club holding an option to extend by a further 12 months. Tete began his career at Ajax before joining Lyon in 2017 and has 13 caps. – Guardian