Chelsea make winning start to life after José against Sunderland 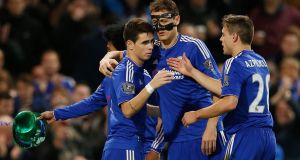 Jose Mourinho may have gone but he was far from forgotten as Chelsea marked the end of an era with a 3-1 win over Sunderland.

Guus Hiddink was in the stands having been confirmed as new interim boss but it was Mourinho, axed 48 hours earlier, who still managed to cast his shadow over Stamford Bridge as goals from Branislav Ivanovic, Pedro and Oscar secured a routine victory for the fallen champions.

Mourinho had chosen the morning of the match to reveal he is already looking for his next job, and the home crowd sung the former manager’s name before kick-off, as well as after all three goals.

Instead it was certain players who bore the brunt of the fans’ anger. One held a banner accusing ‘The Three Rats’; Cesc Fabregas, Diego Costa and Eden Hazard, for getting Mourinho sacked while another read ‘you let Jose down’.

Skipper John Terry had claimed player power had not played a part in Thursday’s decision, but Fabregas’ and Costa’s names were booed when they were read out prior to kick-off — Hazard only escaping the ire as he was absent through injury.

Both players also received hostile reactions when they were substituted during the second half.

Meanwhile Hiddink watched on alongside owner Roman Abramovich and former striker Didier Drogba, after his return to the club he led to FA Cup success in 2009 was rubber-stamped shortly before the game.

If Chelsea are to finally kick-start their nightmare season then they could probably not asked for more accommodating opposition than Sunderland, who were so abject they even looked surprised themselves when they pulled a goal back through sub Fabio Borini.

Mourinho’s name was still ringing round the ground when Chelsea opened the scoring through another player under the spotlight for some poor performances this season — Ivanovic was left totally unmarked when he rose to meet Willian’s fifth-minute corner and nodded the ball high into the net.

Seven minutes later Pedro made it two thanks to some more calamitous defending, this time Sebastien Coates failing to deal with Ivanovic’s cross and allowing the Spaniard to sweep the ball home.

Oscar should have made it three when he strolled through the Sunderland defence as if they were not there, only to hammer his shot straight at Costel Pantilimon, before Costa stabbed over from close range and headed another chance wide.

But three minutes after the break Chelsea had their third, Willian chasing Pedro’s ball into the box before being tripped by Pantilimon, with Oscar slotting in the penalty.

Any thoughts that Chelsea’s defensive failings have disappeared overnight were dispelled six minutes later, however.

Younes Kaboul had far too much time and space to head Adam Johnson’s free-kick toward goals and when Thibaut Courtois parried the ball out, it hit Borini who bundled over the line.

Hiddink would have been given further food for thought had Jermain Defoe hit the target rather than the side-netting, and then seen a late effort kept out by a fine reflex save from Courtois.

After a win which was comfortable rather than comprehensive, the hard work of salvaging Chelsea’s season starts now for Hiddink.