Chelsea go top on the back of Eden Hazard hat-trick 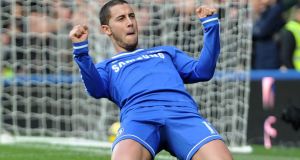 Chelsea’s Eden Hazard celebrates after scoring the second goal of his hat-trick in the Premier League game against Newcastle United at Stamford Bridge. Photograph: Facundo Arrizabalaga/EPA

With erstwhile leaders Arsenal sinking to a miserable 5-1 loss at Liverpool in the lunchtime kick-off and City held 0-0 at Norwich, Chelsea moved a point clear at the top of the pile courtesy of a comfortable 3-0 win over Newcastle at Stamford Bridge.

Hazard, this week dubbed the best young player in the world by his manager, went a long way to living up to that billing as he swept home a fine opener from the edge of the box on 27 minutes

The Belgian made it two on 34 minutes, converting smartly after a superb one-two in the area with Samuel Eto’o. The former Lille playmaker celebrated his treble in the second half, converting from the spot after Mapou Yanga-Mbiwa brought down Eto’o.

While Chelsea appear to be hitting their straps in the title race, the opposite is true of Manuel Pellegrini’s City.

After Monday’s damaging 1-0 defeat at home to Chelsea, City were expected to get back to their free-scoring ways at Carrow Road but came up short as Norwich earned a notable shut-out.

Away from the title battle, the action was just as heated at the foot of the table with Crystal Palace, West Ham, Hull and Swansea City each claiming key wins in their fight to beat the drop.

Garry Monk’s audition to become Swansea’s next manager got off to the perfect start with a handsome 3-0 victory over local rivals Cardiff in a frenetic south Wales derby.

Monk, installed as head coach following Michael Laudrup’s dismissal, watched Wayne Routledge give his side the lead just after the break before Nathan Dyer and Wilfried Bony secured the bragging rights late on.

No fewer than three debutants were on the scoresheet as Palace ran out 3-1 winners at home to West Brom, who now find themselves inside the bottom three.

Tom Ince, signed from Blackpool on deadline day, marked his Eagles bow with a goal after 15 minutes, while Joe Ledley, freshly arrived from Celtic, made it two just before the half-hour.

Another debutant on show needed just 60 seconds to announce his arrival in English football as West Brom’s Thievy Bifouma, on loan from Espanyol, scored after entering the action as a half-time substitute.

Palace made the points safe in the 69th minute when Marouane Chamakh won and scored their third from the penalty spot, although there was more than a little doubt over the award of the spot-kick, with Baggies goalkeeper Ben Foster appearing to connect with the ball as he challenged the Moroccan.

Sam Allardyce’s Hammers set aside the controversy over their failed bid to overturn Andy Carroll’s recent red card as they claimed an eye-catching 2-0 win at Aston Villa.

Kevin Nolan scored twice for the visitors, the first coming within a minute of the restart and the second just two minutes later as West Ham moved out of the relegation zone.

Hull wrapped up a double over Sunderland as goals from new boys Shane Long and Nikica Jelavic saw them to a 2-0 win at the Stadium of Light.

The Black Cats were not helped by the fourth-minute dismissal of Wes Brown for a professional foul on Long, who then compounded Sunderland’s misery by opening the scoring on 16 minutes.

The incident severely dented Sunderland’s aspirations and it was no surprise when Hull doubled their lead in the second half through Jelavic, his first for the Tigers.

In the day’s other game at St Mary’s, Southampton and Stoke played out an entertaining 2-2 draw.

A Rickie Lambert free-kick put the Saints into the lead but Stoke pulled level seven minutes before the break through Peter Odemwingie.