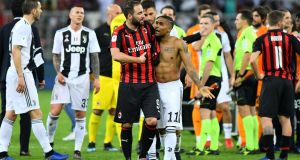 Chelsea are confident they will be able to secure the signing of Gonzalo Higuaín this month and expect progress to be made in negotiations with his parent club, Juventus, and Milan over the next few days.

The Argentina forward is currently on loan at San Siro but, with his relationship with the Milan hierarchy having become increasingly strained, has made clear his preference is to be reunited with Maurizio Sarri at Stamford Bridge. The two Serie A clubs competed in the Italian Supercoppa in Jeddah on Wednesday – Higuaín was omitted from the Rossoneri’s starting lineup as he was apparently suffering from a fever, but came on as a second-half substitute in the 1-0 defeat – and they are understood to have discussed the forward’s future while in Saudi Arabia.

The 31-year-old is unsettled, not least because he feels Milan intend to renege on a promise to sign him permanently for €35m at the end of the season having been unconvinced by his form for Gennaro Gattuso’s side to date this term. Higuaín has scored eight times in all competitions, but only once since the end of October, and commands that hefty fee and wages of €192,000-a-week net. Milan have switched targets to Genoa’s Krzysztof Piatek and will have to make progress on a deal for the Polish striker before sanctioning Higuaín’s release.

Chelsea would not normally pursue a player of Higuaín’s age, and would instinctively be more inclined to go for Internazionale’s Mauro Icardi as a longer-term solution. But Sarri, in desperate need of a striker familiar with his preferred style of play, has made clear a desire to work again with a forward who set a new Serie A goalscoring record of 36 in 35 games over the season under his stewardship at Napoli. He was subsequently sold to Juve for €90m, only to be squeezed out by Cristiano Ronaldo’s arrival in Turin last summer.

he deal, most likely a loan, may be complicated to complete, not least given the various payments Milan had agreed to make to Juve and the option to make the loan permanent, but there is optimism progress can be made in talks. Higuaín’s arrival would pave the way for Chelsea to loan out Álvaro Morata, with Atlético Madrid his most likely destination.

Chelsea continue to resist Bayern Munich’s interest in Callum Hudson-Odoi, despite the Bundesliga club having offered €39.5m for the England youth international forward. Hudson-Odoi, who has yet to make a Premier League start, is keen on a move to Germany having grown frustrated at a perceived lack of senior opportunities and is expected to depart this month. – Guardian service