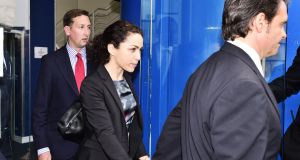 Former Chelsea team doctor Eva Carneiro leaves Croydon Employment Tribunal where she has reached a settlement with Chelsea and Jose Mourinho in a case brought by her against the club and former manager. Photograph: Lauren Hurley/PA Wire

The former Chelsea team doctor Eva Carneiro has reached a settlement with the club over her claim of constructive dismissal.

Carneiro also agreed to drop a claim of sex discrimination and harassment against the former Chelsea manager José Mourinho as part of the confidential deal struck on Tuesday.

As part of the deal, Chelsea apologised “unreservedly” to Carneiro over the incident that led to her departure, when she ran on to the pitch during a match at Stamford Bridge last August to treat an injured player.

Carneiro’s lawyer had told the tribunal that she heard Mourinho, angered by her decision because the team was already down to nine men, call her a “daughter of a whore” in Portuguese.

In its statement, Chelsea said Carneiro had done nothing wrong and said she was a “highly competent and professional sports doctor”.

The tribunal heard on Monday that she had earlier been offered £1.2 million (€1.55 million) to settle, which she had rejected. Carneiro was due to begin testifying on Tuesday afternoon, but her appearance was delayed as the deal was thrashed out. Her testimony had the potential to be highly damaging to the club, but the deal means it will not be heard.

On Monday, the first day of the hearing, the employment tribunal, in Croydon, south London, heard that Mourinho criticised Carneiro and the physiotherapist, Jon Fearn, for running onto the Stamford Bridge pitch to treat an injured player, during a match against Swansea last August.

Their treatment of the player meant the team was temporarily reduced to nine men, as Chelsea had already had a player sent off, angering the manager.

Carneiro’s lawyer said that she heard Mourinho call her a “daughter of a whore” in Portuguese when she ran on to the pitch during the match in question.

In his witness statement, Mourinho claims he shouted filho da puta, which means son of a whore – as opposed to filha de puta, which Carneiro claims – and that it was not directed at the doctor.

Carneiro was subsequently demoted from the bench for first-team duties by Mourinho, who criticised her and Fearn as “impulsive and naive”, and she later left the club.

In a statement, Carneiro said she was relieved to be able to move on from “a deeply difficult and distressing time for me and my family”.

“My priority has always been the health and safety of the players and fulfilling my duty of care as a doctor. In running onto the pitch to treat a player, who requested medical attention, I was following the rules of the game and fulfilling my medical responsibilities.”

Chelsea released its own statement apologising for any distress caused to the club’s former team doctor.

It said: “The club regrets the circumstances which led to Dr Carneiro leaving the club and apologises unreservedly to her and her family for the distress caused.

“We wish to place on record that in running onto the pitch Dr Carneiro was following both the rules of the game and fulfilling her responsibility to the players as a doctor, putting their safety first.

“Dr Carneiro has always put the interests of the club’s players first. Dr Carneiro is a sports doctor. She was a valued member of the club’s medical team and we wish her every success in her future career.

“Jose Mourinho also thanks Dr Carneiro for the excellent and dedicated support she provided as first team doctor and he wishes her a successful career.”

Carneiro had previously demanded a personal apology from Mourinho, which was not forthcoming in the Chelsea statement, which merely expressed the former manager’s thanks for her efforts during her employment.