Championship round-up: West Brom fight back to keep two-point lead at the top 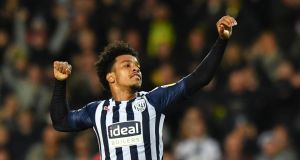 West Brom maintained their two-point lead at the top of the Championship after coming from 2-0 down to draw 2-2 with bottom side Barnsley.

Cauley Woodrow headed the visitors in front at The Hawthorns after 18 minutes and doubled their lead just six minutes later with a superb shot from outside the area.

However, West Brom pulled a goal back when Bambo Diaby could only head a corner into his own net at the near post and Matheus Pereira grabbed the equaliser nine minutes from time.

Leeds could have gone top if Yorkshire neighbours Barnsley had pulled off a shock win, but Marcelo Bielsa’s side also had to settle for a 1-1 draw at Preston.

Tom Barkhuizen fired the home side in front at Deepdale and Leeds were grateful to substitute Eddie Nketiah for heading home the equaliser with just three minutes remaining.

Sheffield Wednesday were the biggest beneficiaries of none of the top three at the start of the evening managing a win, a 1-0 victory over Stoke lifting them to third in the table.

Stoke’s two-match winning run came to an end at Hillsborough as Massimo Luongo pounced on an error from Liam Lindsay to score the only goal just before the interval.

Swansea fell from third to seventh after losing 3-0 at home to Brentford, who took the lead in style with a superb curling shot from Said Benrahma on the half-hour mark.

The visitors were gifted a second goal six minutes later when Jake Bidwell could only poke the ball beyond his own goalkeeper as he tried to prevent Bryan Mbeumo from latching on to a dangerous through ball.

And Mbeumo then scored the best goal of the night after intercepting a pass just inside the Swansea half and surging forward before unleashing an unstoppable shot into the far corner.

New Millwall manager Gary Rowett watched from the stands as his side drew 2-2 with Cardiff in an entertaining clash at the Den.

The visitors took the lead from their first meaningful attack after 12 minutes when Danny Ward headed home from close range from Junior Hoilett’s cross, but Tom Bradshaw fired in an equaliser just before half-time.

Hoilett curled in his side’s second after 57 minutes but Bradshaw levelled for the second time with 13 minutes remaining.

QPR and Reading also shared four goals at Loftus Road, where Nahki Wells drilled the home side in front after 29 minutes, only for George Puscas to equalise two minutes later.

A deflected shot from Jordan Hugill put QPR back in front in the second half but Sam Baldock’s 74th-minute tap-in meant the spoils were shared.

Goals were harder to come by at St Andrew’s, where Maxime Colin’s close-range header gave Birmingham all three points against Blackburn in a 1-0 triumph.