Who will get relegated? Could Charlton potentially get a stay of execution? 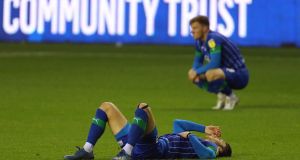 The Championship season reached a thrilling climax on Wednesday evening but there was heartbreak for Hull, Charlton and Wigan who finished in the bottom three.

However, there could be further twists and turns to come before the three teams dropping into League One are known for certain. Let’s have a look at the complicating factors.

What about Wigan’s appeal?

Wigan’s 12-point penalty for entering administration led to them finishing in the relegation places after Wednesday’s final round of Championship matches. They dropped from 13th in the table with 59 points to second-from-bottom on 47.

Administrators have confirmed they are pressing ahead with an appeal against the points penalty, despite costs of up to £500,000 to the cash-strapped club win or lose.

The club feel both the erratic behaviour of their Hong Kong owners and the unforeseen effect of the Covid-19 pandemic are mitigating circumstances. They will argue against the sanction under the ‘force majeure’ clause, because of the wholly unexpected nature of the decision by the club’s owner, Au Yeung Wai Kay, to place them in administration.

What if they lose?

If Wigan lose the appeal there is no further recourse under EFL regulations. The administrators say they have not considered any further action in that event at this stage.

What if Wigan won?

If the points penalty was wiped out, or reduced sufficiently to take them out of the bottom three, then Barnsley would drop into the relegation zone. The South Yorkshire club might then consider action of their own.

What about Sheffield Wednesday’s case?

It has been reported that an independent commission has heard the Owls’ case, which concerns EFL misconduct charges over the circumstances around the sale of Hillsborough.

The Yorkshire club could face a penalty of up to 21 points if found to have committed an aggravated breach of the EFL’s rules, which would drop them to the bottom of the table. Even a nine-point deduction would be enough to relegate them.

Yes, the club would have 14 days to appeal against the outcome of the hearing. But the EFL also has the right to appeal if it disagrees with the independent commission’s decision, or the sanctions it imposes.

So could Charlton potentially get a stay of execution?

It is possible, if Sheffield Wednesday were deducted sufficient points to put them in the bottom three at the end of that process, and Wigan’s appeal was unsuccessful.

When will more be known?