‘It is time to speak up. If you have to close the stadiums and hand out bans, we should’ 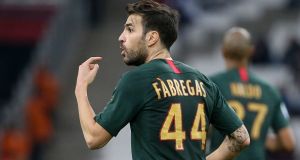 Cesc Fabregas says he has no doubt Frank Lampard’s Chelsea side will secure a Champions League place this season and predicts big things for Mikel Arteta’s Arsenal team in the coming years. File photograph: Getty Images

The sun is shining in London as Cesc Fàbregas appears on Zoom and admits with a laugh that the weather is quite the opposite on the French Riviera. “It’s been raining today,” he says with a hint of disappointment, which is understandable given the Monaco midfielder is speaking from Saint-Tropez.

Amid the unexpected downtime afforded by the decision in late April to cut short the French football season, Fàbregas has been keeping a close eye on events around the world. The 33-year-old speaks passionately about the wave of protests that have erupted following the killing of George Floyd.

In football, it has restarted tough but necessary conversations about the prevalence of racism in the game. “In the stadiums, there is ignorance, people insulting you about the colour of your skin; it’s stupid,” Fàbregas says.

“Unfortunately it’s been happening for years and years and it is time to speak up and act. If you have to close the stadiums and hand out bans, we should. They need to go to jail - let them go to jail - but whatever needs to be done has to be done once and for all. There will still be some idiots that will want to be the clowns of the party but if they have to pay a high price for it, they should, because it shouldn’t be allowed any more in sport and in the world.”

Fàbregas is not the only footballer to take a stand against racism or speak about the tough measures needed to eradicate it. From Bundesliga players who have displayed anti-racism messages during games to squads at Liverpool, Chelsea, Arsenal and elsewhere in the Premier League taking a knee, and Raheem Sterling calling for greater representation of black, Asian and minority ethnic people in coaching and administrative roles, they are making their voices heard.

Fifa has advised national associations not to punish those taking a stand on the pitch against racism and other forms of discrimination. Is it now easier, and more acceptable, for players to speak up about issues that matter most to them - even if it’s not about the game?

After a short pause, Fàbregas replies: “Yes, I think so, because there have been some strong players recently that have stood up for themselves. They don’t care about the consequences - they have just been strong and I take my hat off to them because it’s not easy.

Footballers have often been criticised for speaking up about issues outside the game but Fàbregas says: “We have this platform, through the media, that can be positive for the world. We are all fighting for a better place - a better world.”

Minutes before the interview, news breaks that France’s highest administrative court has rejected an appeal by Lyon, Toulouse and Amiens against the early termination of Ligue 1. The original decision was made by the French Professional League after the government cancelled sporting events until September. Given the Bundesliga’s successful return, it is one Fàbregas feels was “rash”.

“When we talk about football, we just talk about players,” he says. “But behind us 20 to 25 players, there are five times more people working in a club. People need money, they have families who live in Monaco, which is a very expensive place to live, and they need to pay their rent.

“I don’t know if the image of Ligue 1 has been damaged globally but what I know for sure is that it could have been avoided. It’s caused a lot of problems, not only economically but also in terms of signing players in the future. [/I THINK/]Ligue 1 will pay for it in terms of investment and the selling, loaning and buying of players and a lot of clubs will struggle this season to improve their teams.”

Fàbregas is, however, impressed with the Premier League’s “perfect and very British” approach to restarting play that is “cautious” but “professional”.

That brings us to Chelsea and Arsenal, whom he watches from the Côte d’Azur. The Catalan has no doubt Frank Lampard’s side will secure a Champions League place this season and predicts big things for Mikel Arteta’s team in the coming years.

“Chelsea took a gamble with Frank because it was only his second year as a main coach and he’s done very well. With Mikel it’s a little bit of the same. He’s been with Pep [/GUARDIOLA/]for three years, and I’m sure he’s like a master for any young coach that wants to start being a manager.

“I think he’s done well [so far] and I’m sure he’s brought back some values to the club that was needed. Obviously it’s a much harder job than Chelsea in terms of rebuilding the squad, and they are very young, and they had problems because [ARTETA]started much further down the line than Chelsea, but I’m positive that they will pick up very soon and that next season could be the one for them.”