Case against José Mourinho may go to public employment tribunal 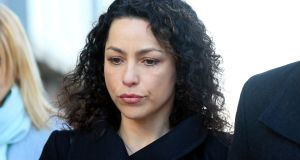 Former Chelsea doctor Eva Carneiro: shook her head briefly when asked if a resolution had been reached. Photograph: PA

José Mourinho and his former club Chelsea may be heading for a public employment tribunal after lawyers apparently failed to reach a settlement with their ex-team doctor .

Eva Carneiro was criticised by Mourinho and dropped from first-team duties after she went on to the pitch to treat Eden Hazard during a draw with Swansea on the opening day of the Premier League season last August.

She is suing Chelsea for constructive dismissal and has a personal legal action against Mourinho, who left the club in December, for alleged victimisation and discrimination.

After the private hearing at the London South Employment Tribunal, Carneiro’s barrister Mary O’Rourke QC refused to be drawn on whether a deal had been reached, saying: “Mediation proceedings are confidential.”

Carneiro refused to speak to the media as she left the tribunal in Croydon accompanied by her husband, polar explorer Jason De Carteret, but shook her head briefly when asked if a resolution had been reached.

Lawyers are believed to have failed to reach a financial deal during a hearing that lasted about 6½ hours, meaning the case is now likely to go to a full employment tribunal, expected to be held in June.

That would be held in public and could see Mourinho, Carneiro and representatives from Chelsea called to appear as witnesses. Statements and documents would also be likely to be made public.

Before yesterday’s hearing, O’Rourke called for Mourinho to make a “public apology” to her client. The former Chelsea boss was not present at the hearing.