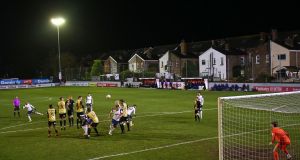 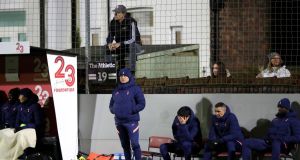 Tottenham manager Jose Mourinho watches the game as fans are seen watching the FA Cup tie against Marine from their back gardens. Photograph: Clive Brunskill/Getty Images

There was no shock to end all shocks – really, how could there be? – but the surrealism of Tottenham visiting Marine in the third round of the FA Cup was not erased by a straightforward away win.

As Gareth Bale sprayed passes around Rossett Park, José Mourinho sat on a chair with the garden of 19 Rossett Road behind him and a cardboard cut-out of Jürgen Klopp a few yards over his right shoulder. “Three Lions” blared out from the back of 11 Rossett Road while Gary Lineker and Alan Shearer threw a few shapes on the makeshift TV gantry nearby.

A magnificent cup run is over for the only the second team from the eighth tier of English football to reach round three, although its impact will be lasting. Marine launched a virtual ticket appeal to make up for the £100,000 in commercial revenue that stood to be lost by the game being moved behind closed doors. By the time the final whistle blew on Spurs’ professional victory over 30,000 tickets had been sold and over £300,000 raised.

With their league suspended until at least March 6th the non-league club from Crosby, just north of Liverpool, need every penny they can get. Their players adapted to the biggest test of their lives admirably, holding their own for 23 minutes until Carlos Vinícius scored the first goal of his hat-trick. Sixteen-year-old Alfie Devine came off the bench for Spurs at half-time and straight into the record books as the club’s youngest ever goalscorer when he added the fifth.

Social distancing went out the window before kick-off as hundreds of people lined College Road to witness the arrival of the team coaches. Mourinho and his players alighted on the road outside the Marine Travel Arena, opposite Smithie’s Hairdressers and a few yards down from ‘The Bug’ (as The Edinburgh public house is known locally), before making their way to the function room that served as their changing room.

Even with nine changes to the team that beat Brentford in the Carabao Cup semi-final in midweek, this was still a Spurs side worth popping to the bottom of the garden to see. Heung-Min Son and Gareth Bale may have been on the bench, and Harry Kane rested completely, but Moussa Sissoko, Lucas Moura, Toby Alderweireld and Dele Alli all started and the visiting squad boasted over 400 international caps between them.

For Marine the task was easier in theory than practice: keep things tight, stay in the game and capitalise on any opportunity they could create. For 23 minutes they delivered on almost every count, and were inches away from taking a truly stunning lead from their first attack on Joe Hart’s goal.

Neil Kengni, collecting the ball deep in the Spurs’ half, ran at a back-tracking defence before unleashing a 30-yard drive that smacked against the top of Hart’s crossbar. The former England goalkeeper tipped the rebound over for a corner having been caught out by the dip on Kengni’s initial shot.

“Come on Marine, these are shite!” bellowed a home fan, clearly over-intoxicated by the near-miss, from behind Bayleigh Passant’s goal. Spurs soon put him right. The fairytale evaporated in the space of 14 first-half minutes as Alli stepped up a gear and four goals, all from Brazil, punctured Marine’s bubble.

Alli made the first when he exchanged passes with Gedson and crossed low to the far post where Vinícius bundled the ball around Passant before lashing home on the goal-line.

His second was only a little further out, and again created by Alli. The Spurs playmaker picked out Matt Doherty’s run at the far post with a perfectly weighted cross. Passant, released by Tranmere last year, produced a fine save to turn away the defender’s header but could only tip the ball into the path of Vinícius for another tap-in.

Moura scored the third, curling home a free-kick from 20 yards that he had won, and Vinícius claimed his hat-trick following more good work by Alli on the right. The Brazilian forward reacted sharply after Josh Hmami failed to clear and beat Passant with a dipping shot from just inside the area.

The romance of the occasion had faded for Marine, but did not disappear from the tie completely. Devine replaced Sissoko at half-time to become the youngest debutant in Spurs’ history at 16 years and 163 days. He quickly added the title of Spurs’ youngest ever goalscorer to his list of achievements as the midfielder, signed from the clear-out forced on Wigan Athletic when they went into administration, drifted inside two Marine defenders on the left and beat Passant with a powerful low drive to the near post.

Neil Young, the Marine manager, stuck to his promise to make five substitutions so that most of his squad could compete in the game. They shared the pitch for the 25 minutes with Bale, who replaced Alli on his return from injury, and enjoyed their strongest spell of the game at a stage when superior Premier League fitness could have told to a punishing degree. – Guardian