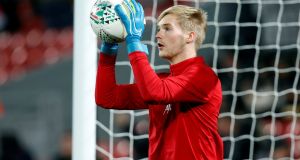 Caoimhín Kelleher will make his Anfield first-team debut in Liverpool’s Carabao Cup tie against Arsenal on Wednesday night as Jürgen Klopp makes 11 changes from the side that beat Tottenham in the Premier League on Sunday.

The 20-year-old from Cork played 90 minutes away to MK Dons in the last round of the competition, keeping a clean sheet in a 2-0 win.

Among the other youngsters named in the side was Harvey Elliott, who at 16 years and 209 days will become the youngest player to appear for the club at Anfield, while 18-year-old Neco Williams making his first-team debut. Rhian Brewster and Sepp Van Den Berg will also line out.

Mesut Özil made his only his third appearance of the season – and his first since September 24th – after being named in Arsenal’s team.

The former Germany international has not featured in a matchday squad since his outing in the last round against Nottingham Forest but was one of 11 changes.