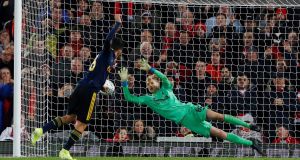 Liverpool’s young Irish goalkeeper Caoimhín Kelleher saves a penalty from Dani Ceballos during the shootout in the carabao Cup round of 16 game at Anfield. Photograph: Jason Cairnduff/Action Images via Reuters

Jürgen Klopp and Unai Emery rang the Carabao Cup changes and for once there were no complaints. Liverpool and Arsenal traded 10 goals that ranged from ugly to stunning and everything in between. They traded mistakes, terrible ones, and they traded blows from beginning to the very end. Only one penalty in a shootout separated them and, when an enthralling cup tie was all over, it was Liverpool celebrating a place in the quarter-finals.

Caoimhín Kelleher – the 20-year-old Irish goalkeeper – made the decisive save in an otherwise perfect shootout from Dani Ceballos as Arsenal paid the price for failing to defend a 3-1 lead, a 4-2 lead and a 5-4 lead in the dying seconds.

Liverpool’s other telling contribution came from Divock Origi, who converted an injury-time volley as a host of Arsenal defenders stood watching to spare the home side a first Anfield defeat in 13 months and send the tie to penalties. Curtis Jones converted Liverpool’s fifth and final penalty to punish Ceballos’s failure from 12 yards.

Both managers made 11 changes to their starting line-ups from the weekend while claiming they were treating the competition with the utmost respect. Emery’s selection was more experienced and he took out the insurance policy of a substitutes’ bench packed with first-choice talent.

Klopp did not even go that far. A midfield of Alex Oxlade-Chamberlain, Adam Lallana and Naby Keïta offered maturity, so too captain James Milner at left back but the Liverpool team – and bench – was otherwise packed with young talent.

The teenage summer signings Harvey Elliott and Sepp van den Berg were among five Anfield debutants while the 18-year-old right back Neco Williams made his full Liverpool debut in a starting line-up with an average age of 23 years and 122 days. There was no sign of nerves in a confident start from the home side before it was undermined by a combination of carelessness and inexperience.

Oxlade-Chamberlain’s movement into the channels created problems for his former club and the early breakthrough for his current one. Williams, a Wales under-19 international, released the midfielder behind Sead Kolasinac and Oxlade-Chamberlain delivered a first-time cross towards Rhian Brewster at the near post. Shkodran Mustafi diverted it past his own goalkeeper with his left knee. A dreadful return to the side for the Germany World Cup winner, and he almost made matters worse moments later with an undercooked back pass to Emiliano Martinez that forced the goalkeeper to take evasive action as Brewster closed in.

Arsenal, with Mesut Özil back in from the cold, drew level from their first meaningful attack. Martinelli instigated the equaliser with a powerful surge down the left and low cross that Lucas Torreira and Özil were unable to convert. Özil kept the pressure on, however, Bukayo Saka’s shot was saved low by Kelleher but Torreira snapped up the rebound from close range. VAR would have disallowed it for offside.

The visitors overturned the deficit when Torreira released Ainsley Maitland-Niles down the right and, from his second attempted cross, Van Den Berg miscued towards his own goal. Kelleher saved but Martinelli was on hand to convert into the roof of the net.

Arsenal were clinical with their chances. Liverpool fell further behind when over-elaborating out of defence. Elliott turned a Williams pass carelessly inside to Özil, who released Saka clear down the left with a fine first touch. The cross arrived low and perfectly for Martinelli to score his seventh goal in seven appearances with an emphatic shot over the exposed Kelleher. Emery’s team sensed daylight and welcome respite but the fun was only just beginning.

Liverpool’s wayward passing and uncertain defending tested Anfield’s patience but they were offered a route back minutes before the interval when Elliott tumbled over Martinelli’s out-stretched foot inside the penalty area. Andre Marriner had no hesitation in pointing to the spot, seconds after dismissing a penalty appeal for handball by Hector Bellerin, and Milner duly sent Martinez the wrong way.

Milner of all people was responsible for Arsenal regaining a two-goal advantage when his weak backpass played in Maitland-Niles. The winger’s first touch took the ball away from Kelleher and the goal but the quick-thinking Özil kept play alive with an improvised flick. Maitland-Niles tapped into an empty net and Liverpool had it all to do once again.

The comeback recommenced with a thumping 25-yard strike from Oxlade-Chamberlain, who found the top corner having beaten Maitland-Niles to a Lallana header. It restored parity when Curtis Jones, a replacement for the subdued Keïta, found Origi on the edge of the Arsenal area and the striker turned Rob Holding brilliantly before beating Martinez with a thunderous shot.

And back came Arsenal. The tie was ridiculously open and so too was Liverpool’s midfield when Joe Willock breezed through minimal resistance before unleashing a shot from almost 30 yards that sailed away from Kelleher and dipped into the top corner. – Guardian