Burnley hold out Crystal Palace for first win of the season 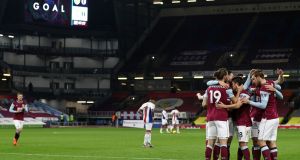 Burnley are on the move at last, not only scoring their first home Premier League goal of the season but holding on for another 82 minutes to secure a first victory and climb out of the bottom three.

Such an outcome seemed unlikely at times, with Crystal Palace moving the ball around effectively in midfield and creating a number of opportunities to answer back, though without the self-isolating Wilfried Zaha their finishing was not always as incisive as their approach work and they were left to rue the defensive mistake that allowed Burnley to take the lead.

The home side’s finishing was nothing to shout about either, Johann Gudmundsson and Chris Wood both missed clear second-half openings to allow their side to breathe a little easier, but with Robbie Brady lasting less than 20 minutes after coming back from injury Burnley were happy enough to see out the game and claim the points.

The first goal Turf Moor has seen in over 320 minutes of league football came early in the game and was surprisingly easy for Wood to score. Once Jay Rodriguez had knocked the ball into his path the burly Kiwi could hardly miss with only Vicente Guaita to beat from close range. A Palace mistake set up the chance, Cheikhou Kouyaté heading out straight to Rodriguez when attempting to clear Gudmundsson’s speculative cross, but with hardly any time to react the Burnley forward could hardly have managed a better first touch.

Palace had started the game well, Nathaniel Clyne bringing a fingertip save from Nick Pope after just a couple of minutes, and they continued to apply pressure to the Burnley defence once behind. Michy Batshuayi was inches away from touching in James McArthur’s ball across the face of goal after the lively Eberechi Eze had given Matt Lowton the slip on the left, then the Belgian striker followed up with a shot of his own that rolled narrowly the wrong side of a post.

Despite their promising start Burnley were getting pushed back by the end of the first half, though for the most part they restricted their opponents to attempts from distance. Most notable of those was a thumping shot from 25 yards out by Andros Townsend, on target but tipped over the bar by Pope.

Burnley opened the second half with a penalty appeal after Kouyaté and Rodriguez brought each other down on the edge of the area, but Kevin Friend waved play on. He was probably right, as contact by both parties appeared accidental and the coming together was just outside the box in any case.

The home side had a much better opportunity to take firm control of the game when Charlie Taylor and Dwight McNeil combined to send Gudmundsson charging through the middle completely unmarked. The winger opted to shoot early from the edge of the area, only to see his well-struck effort come back off the crossbar.

Gudmundsson might have regretted that miss had Palace been able to equalise minutes later, and they had the chance when McNeil hit a woefully misdirected back pass after an hour, but though Batshuayi was quick to seize possession he was unable to find a finish from the edge of the area.

Wood could not take advantage of another one-on-one situation with Guaita as the match moved into its final quarter, and after Brady had limped off after coming on as a second-half substitute, Pope stood up tall in the Burnley goal, taking a knock to the head in the process, to prevent Christian Benteke claiming a 90th-minute equaliser. - Guardian