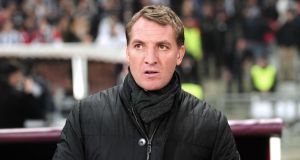 Liverpool head coach Brendan Rodgers says team still have “a great chance to achieve what we want to achieve this year. We can’t afford to dwell on the Europa League.” Photograph: Ozan Koseozan/AFP/Getty Images

One route into the Champions League closed on Liverpool in Istanbul and Brendan Rodgers believes his players face a psychological challenge to enhance their prospects of qualifying through the Premier League against Manchester City tomorrow.

It was the Liverpool manager who claimed Manuel Pellegrini’s team have a “crucial” advantage in the noon kick-off at Anfield owing to the physical toll of Thursday’s Europa League tie against Besiktas.

With fewer than 56 hours to prepare for City, the decision to rest Philippe Coutinho and not risk Jordan Henderson’s ankle problem against Besiktas gives Rodgers the opportunity to alter a team that faded badly on Thursday. But he concedes that a second swift exit from European competition this season, courtesy of Dejan Lovren’s penalty miss in an otherwise flawless shootout, will test Liverpool’s resolve when they look to extend a 10-match unbeaten run in the Premier League against the team that pipped them to last season’s title.

“We gave it everything that we had. We were missing a lot of players and now we have to refocus. We still have a great chance to achieve what we want to achieve this year. We can’t afford to dwell on the Europa League. This phase of the season is very much about the psychological aspect as well as the physical, so I have to prepare the players mentally for coming into the business end when you are looking to win games and become stronger.

“The players will gain from Thursday’s experience. We did not gain in terms of the result but the young players won’t play in many more intimidating atmospheres than Besiktas and they coped very well.”

Steven Gerrard is not expected to return from a hamstring problem in time for City’s visit, but Liverpool’s continued development in the absence of the captain, with Emre Can to the fore, has been a consolation for Rodgers.

“Steven is still a big influence in big games,” he said, “but, by the same token, and it is clear what is happening moving forward, there are a lot of exciting young talents if you look around the squad.

By contrast, Daniel Sturridge toiled against Slaven Bilic’s team and was fortunate to remain involved for 105 minutes while Mario Balotelli, who contributed more to the overall performance, was withdrawn with eight minutes of normal time remaining.

Rodgers said: “Daniel is getting game time and you could see late in the game and early in extra time that his legs had gone. But that is part of his rehabilitation. He gets game time, he gets the recovery and he will get ready for the weekend.” – Guardian Service