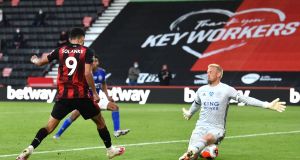 There simply was no better time for Dominic Solanke to score his first Premier League goals in a Bournemouth shirt, with the striker at the double as Eddie Howe’s side rallied from behind to dent Leicester’s hopes of qualifying for the Champions League with an improbable victory that relights their fight for survival. Solanke scored in the league for the first time in 788 days before wrapping up victory after Leicester imploded when they were reduced to 10 men after Caglar Soyuncu got caught up in a minute of self-inflicted madness.

Results elsewhere could scarcely have been worse from a Bournemouth perspective, with Watford, West Ham and Aston Villa all picking up victories before kick-off. If they were not already feeling downbeat, they were truly dejected by half-time, at which point, Leicester should have been home and dry.

For Bournemouth, a hairy start festered as Jamie Vardy seized on the last of a catalogue of errors, the striker scooping the ball over the line when Lloyd Kelly attempted to flick clear on the goalline. But it was a dreadful strike to concede from start to finish, with Dan Gosling pickpocketed by Ayoze Pérez, who broke on halfway before slipping in Kelechi Iheanacho, who lifted the ball into the box towards Vardy, who feasted on the leftovers.

He piled in and Bournemouth took the unwanted crown of becoming the first team to concede at least 60 goals in five successive Premier League seasons. That numbing statistic tells its own story for a team who have kept just one clean sheet from their last 18 matches, yielding nine points from a possible 54.

Given Bournemouth had not come from behind to win a league game for almost two years, such a riposte seemed unlikely and things went from bad to worse seven minutes before the break when Nathan Aké hobbled off after overstretching to prevent Vardy doubling his and Leicester’s advantage.

Arnaut Danjuma plunged Bournemouth into trouble with a blind backward pass straight to a grateful Vardy, who leathered a shot towards goal. Leicester were sharp, with Iheanacho twice spying an opening before testing Aaron Ramsdale in the Bournemouth goal. Aside from David Brooks forcing Kasper Schmeichel into a superb left-handed save, the hosts were static, laboured and seemed to be carrying too many players. They were second best in midfield, while the left flank proved a particular weak link, so it was no surprise when Danjuma and Gosling, who was booked, were withdrawn at the break.

What happened next was impossible to envisage. Midway into the second half chaos ensued inside the Leicester 18-yard box after Schmeichel smacked a goal-kick into the backside of Wilfred Ndidi, inviting Callum Wilson to try and round the goalkeeper. At that point, Ndidi and Schmeichel combined to bring Wilson to ground and Junior Stanislas stepped up to dispatch the spot-kick.

“Let’s go again,” urged Howe on the touchline and his team listened, while Schmeichel wellied the ball into an empty stand. Leicester were sloppy from the restart and, almost immediately, Diego Rico slipped in Solanke, who drove forward unchallenged and drilled through the legs of Schmeichel. Then Soyuncu’s frustrations got the better of him, petulantly kicking out at Wilson to give those at Stockley Park the easiest decision at the end of a wretched week.

But Bournemouth still had more to give, with Schmeichel wrong-footed after a Stanislas shot deflected off Jonny Evans before Solanke wrapped up an extraordinary victory, seizing on a sloppy pass by Christian Fuchs before wriggling into the box before slotting home – with ease. In the end, it was Bournemouth who could have run away with things, with the substitute Sam Surridge thrashing the ball wide after latching on to an error by Evans. – Guardian