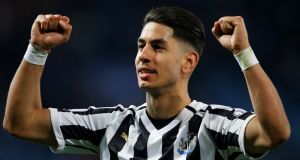 Rafael Benítez did a number on his fellow former Liverpool manager as Newcastle boosted their survival hopes by ending Brendan Rodgers’s winning streak at Leicester. Rodgers’s strong four-game run came to a shuddering end as Ayoze Pérez headed the goal that gave Newcastle maximum reward for accomplished away display.

Newcastle arrived knowing that a victory would go a long way towards securing their Premier League status for next season, and that in turn might resolve the standoff between Benítez and Mike Ashley over the manager’s future.

The Spaniard spent the build-up hinting not very subtly about the level of investment he would like to see if he stays, and it was clear that it was dependent on the club remaining a top-flight concern. It was also plain that if Newcastle were to win here, they would need to produce their best away performance for months.

Florian Lejeune’s season-ending injury forced Benítez to change personnel but not formation – he chose to stick with a three-man central defence, deploying Paul Dummett on the left of it.

The travelling that interested Leicester, meanwhile, was a potential European campaign next season. With seventh place still up for grabs, Rodgers made only one alteration to the line-up that began last week’s thrashing of Huddersfield, with Harry Maguire returning at centre back.

In the first minute Newcastle forced a corner from which Jamaal Lascelles got off a header that Kasper Schmeichel had to block. Within 20 seconds the action had switched to the other end, as Martin Dúbravka stopped an effort from Jamie Vardy.

Soon the contest settled into the expected pattern, Leicester probing while Newcastle strived to keep them at bay and strike on the counter, with Salomón Rondón serving as an ever-willing one-man front line.

Rondón has been a big hit at Newcastle since his arrival on loan from West Bromwich Albion. Before the game, Benítez challenged him to take his tally of league goals for the season into double figures to help convince Ashley to pay the £16.5 million required to sign him permanently.

He nearly made an irresistible case for that purchase in the 15th minute when he sent a terrific free-kick from 25 yards over the wall. Schmeichel could only wave at the ball as it flew past him. He was relieved to see it bounce out off the crossbar.

Leicester were struggling to pick a way through Newcastle’s defence. Ben Chilwell cut through with the aid of a sharp one-two, but Dúbravka foiled his attempt to curl a shot into the bottom corner. Then Newcastle tore forward. Matt Ritchie’s cross from the left was perfect and so too was Pérez’s run, as he beat Wes Morgan to the ball at the near post to guide a splendid header into the net.

Leicester were unable to feed Vardy for most of the match and when Youri Tielemans finally presented him with a chance, the striker shanked the ball into the stands. – Guardian