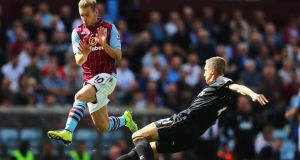 Aston Villa equalled their best start to a Premier League season as first-half goals from Gabriel Agbonlahor and Andreas Weimann enabled them to overcome their Capital One Cup defeat by Leyton Orient and complete a miserable few days for Hull City.

Not since the start of Martin O’Neill’s reign eight years ago have Villa managed to accrue seven points from the opening three games and amid a new-found feeling of relief after a summer of uncertainty, the Holte End were even cheering for Paul Lambert to give them a wave as Hull threatened to capitulate.

Following the exhilaration of going 2-0 up in the FA Cup final against Arsenal, Hull’s elimination from the Europa League on Thursday on away goals to Lokeren pricked the bubble of belief that Steve Bruce has steadily been building in his time in charge.

With four points from their first two games, Michael Dawson making his debut and Abel Hernandez on the verge of tying up the loose ends of a €12.6 million move from Palermo, all is not doom and gloom for Hull but only after Nikica Jelavic’s header deflected in off Aly Cissokho 16 minutes from time did Villa look in any danger of failing to win.

Lambert’s new-look team have been more solid than scintillating as they have beaten Stoke City and drawn against Newcastle United and it was with only their second attempt on target in the league this term that they went ahead in the 14th minute.

Jelavic gave the ball away too easily for Charles N’Zogbia to feed to Weimann whose short pass to feet invited Agbonlahor to turn his man on the edge of the penalty area and fire home his first goal of the season. Fabian Delph had already shot against the outside of the post and Dawson needed to slide in to prevent Weimann converting Agbonlahor’s cross as Villa took control.

With Hull out of sorts with their three-man back line, the home side, who lost a club record 10 games at Villa Park last season, looked to have secured the points nine minutes before the interval. Delph, fresh from his England call-up, nicked the ball off Dawson and passed for Agbonlahor to slip in the advancing Kieran Richardson. The former Fulham man composed himself sufficiently to pull the ball back for Weimann, Villa’s matchwinner at Stoke a fortnight ago, to control with his first touch and dispatch his shot into the far corner with his second. Ashley Westwood struck a fee-kick against the post as Bruce’s team looked likely to subside.

Hull were much improved in the latter stages after Robbie Brady, after scoring both goals against Lokeren, replaced the disappointing Tom Ince and it was the former Manchester United youngster whose free-kick led to Jelavic’s second goal of the season. Still Delph and Darren Bent, on as a substitute, could have scored again on the break as Villa withstood Hull’s pressure.