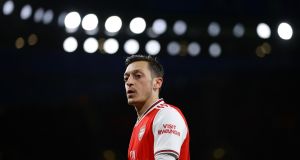 Mesut Özil’s future will be decided in ‘the next few days’, according to Mikel Arteta. Photograph: Richard Heathcote/Getty

Mesut Özil’s future will be decided in “the next few days”, according to Mikel Arteta, although the Arsenal manager admits he does not yet know how or when the saga around his exiled playmaker will end.

There is little doubt Özil, whose contract expires in the summer, has played his final game for the club and all parties are keen to move on from a soured relationship that has cast an expensive shadow. Özil has been linked with Fenerbahce and DC United in this transfer window although his agent, Erkut Sogut, said on Wednesday that the player’s “priority is to stay” until the end of the season.

“I’m saying we will decide what’s happening in the next few days,” Arteta said when asked whether Özil could remain at the club. “I don’t know what is going to happen. Obviously now he’s free to negotiate with other clubs. We will discuss internally what the best solution for him is for the near future, obviously with the player and agent too, and try to find the best solution for everyone.”

The logistics around Özil departing this month are likely to be complicated given none of his suitors would be able to match his £350,000 weekly wage. A simpler option might be for the former Germany international to commit to moving after his deal ends, but that would mean Arsenal have to retain a player omitted from Arteta’s Premier League and Europa League squads in October.

“If something was sorted this month, it’s because it is good for both parties, it is good for Mesut and his future, and it’s good for the club,” Arteta said. “If that’s the case, we will move forward. If it’s not the case, the player will stay here.”

Özil is available for the FA Cup third-round tie with Newcastle on Saturday, although his involvement seems unthinkable. Thomas Partey could return from the thigh injury that has kept him out for all bar 45 minutes of the past two months’ action, although Arteta suggested he could be kept fresh for the Premier League meeting with Crystal Palace on Thursday.

Whereas Özil’s fate is a relatively short-term issue for Arteta, the manager is increasingly anxious about the prospects of Folarin Balogun, a highly rated striker, committing his future to Arsenal. Balogun’s deal is up in July and a number of clubs are understood to be making inquiries about taking him on. Arteta suggested any stumbling block lay at the feet of the player’s representatives.

Balogun shares a representative with several of Arsenal’s other young players, as well as the Borussia Dortmund forward Jadon Sancho. Arteta subsequently rowed back slightly on his assertion but the implication was clear.

“We are doing everything we can to keep him here and hopefully they are doing the same and they defend the same interests, which is the players’ interest, which is to stay at the football club and be successful with us.” - Guardian