Arsene Wenger v José Mourinho: Who will be lucky number 13? 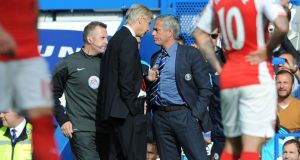 The two sides are battling it out to finish in the top four but Wenger has never beaten the Portuguese in 12 Premier League meetings — with Mourinho largely winning the battle between the pair during two spells as Chelsea manager and this season at United.

A new club for Mourinho but still Wenger could not take three points from the Red Devils’ boss in their first meeting at Old Trafford.

Juan Mata had put United ahead just after the hour-mark but Arsenal fought back to earn a point as Olivier Giroud came off the bench to head home an 89th-minute equaliser.

This was just a second league win of the season for Mourinho’s struggling champions as Kurt Zouma put the Blues ahead before Gabriel was sent off for the visitors before the break.

Santi Cazorla’s dismissal saw Arsenal go down to nine men, with a last-minute Calum Chambers own goal sealing the points for Chelsea.

A battling draw for champions-elect Chelsea as they brought an end to a fine run of wins for their hosts.

Wenger’s side created far more chances but the point took Mourinho’s men 10 points clear of Manchester City at the summit.

Wenger and Mourinho clashed on the touchline as Eden Hazard put Chelsea ahead from the penalty spot.

Diego Costa’s ninth goal in seven games following his arrival from Atletico Madrid wrapped up the points and put Chelsea five points clear at the top of the table.

Wenger’s 1000th game in charge of Arsenal was one to be remembered for all the wrong reasons for the long-serving Frenchman.

Early goals from Samuel Eto’o and Andre Schurrle put Chelsea in charge before Kieran Gibbs was incorrectly sent off for an Alex Oxlade-Chamberlain handball which saw Hazard score from the spot.

A brace from Oscar and a strike from Mohamed Salah secured Mourinho’s biggest-ever win as Blues boss.

An instantly forgettable stalemate, which meant Arsenal missed the chance to top the table heading into Christmas.

Frank Lampard hit the bar for Chelsea while Giroud missed two decent chances to take the points for the hosts.

Wenger may not have managed to break his duck against Mourinho — but this draw at the Emirates Stadium saw Man United crowned champions at the expense of Chelsea.

Gilberto Silva’s penalty put Arsenal ahead after Khalid Boulahrouz had been sent off for fouling Julio Baptista, with Michael Essien pulling a goal back for the Blues.

Mathieu Flamini’s strike 12 minutes from time looked to have Arsenal on course for a rare Premier League win over Chelsea.

But Essien levelled before both he and Lampard hit the woodwork in stoppage time as Mourinho’s side pushed on for the victory.

Chelsea moved nine points clear at the head of the table courtesy of a well-deserved win at Highbury.

Arjen Robben scored before the interval before Joe Cole wrapped up the win after Thierry Henry had hit a post and Robin van Persie had a goal chalked out for offside when the scores were level.

Didier Drogba’s lucky goal secured a first Premier League win for Chelsea over their London rivals in almost a decade.

The Ivory Coast striker tried to control a cross but saw the ball hit his knee and fly past Jens Lehmann to ruin Wenger’s 500th game at the Arsenal helm.

A win for Chelsea would have seen them win their first title in 50 years and wrestle the crown from the reigning champions.

Instead the pair played out a goalless draw in which Robert Pires hit the bar and missed a great chance, while Drogba and Lampard threatened for the home side.

The first Premier League meeting of Wenger and Mourinho saw both settle for the share of the spoils following an enthralling draw at Highbury.

Thierry Henry opened the scoring in sensational fashion before putting the Gunners back in front with a quickly-taken free-kick after John Terry had equalised.

Eidur Gudjohnsen scored the second leveller of the day for Mourinho’s men, with Flamini seeing a late penalty appeal rejected.