Thierry Henry has his opinions. He has not found the measurement of the fans angriness 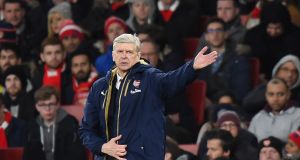 Arsene Wenger believes he has the full support of Arsenal fans ahead of the weekend’s derby. Photograph: EPA

Arsene Wenger has cast aspersions on the opinion of his old protege Thierry Henry on the sensitive subject of supporter unrest ahead of Saturday’s north London derby.

Henry, the club’s record goalscorer, declared in his column in the Sun newspaper that he had “never heard the Arsenal supporters as angry as they were at the Emirates on Wednesday night”, following Arsenal’s 2-1 loss to Swansea City. When these comments were put to Wenger at his weekly press conference on Friday, his response was pointed: “Thierry Henry has his opinions. He has not found the measurement of the fans angriness of 60,000 people straight away because he sits in the best seats in the stadium”. When he is not working, Henry watches Arsenal from an executive box.

The situation is particularly awkward because Henry currently works at Arsenal coaching their Under-19 side. Wenger finds the whole scenario unhelpful as his priority is to focus on a critical game. “The fans will be behind us, I don’t worry for that,” he added. “This is one game where fans are always behind us, and it is down to us to give them more belief and make them more vocal. Confidence has been a bit jaded. Always in football, we do 98 per cent of things right and need to find two per cent. That’s down to our collective qualities and putting more effort in.”

This particular north London collision comes when both teams are under some scrutiny about their capacity to handle the pressure of a title challenge, both having lost in midweek. “This is maybe one of the few where the title race is at stake, maybe the only one since I am here,” said Wenger.

Arsenal’s form has been badly damaging, with three consecutive defeats and a

draw at home against Hull in the FA Cup since the promise of a last gasp win over Leicester. Arsenal travel to White Hart Lane without Petr Cech and Laurent Koscielny, two influential components of a defence that has anyway been struggling in recent weeks.

Cech will be out for three-to-four weeks. “It’s a serious calf injury,” said Wenger. “He had a groin alert on the first goal. Maybe he compensated a bit too much and provoked another muscular injury. We had to make the decision before the game because he had a little groin problem but he declared himself 100 per cent fit. Then you have to trust the player.

“He’s 33-years-old and he knows his body. If he says he’s fit then he is available. You want the players to be tough enough to sometimes be able to play through a little pain. You’re never completely perfect before a game in March. He took that very well and I respect that.”

Wenger re-iterated his faith in reserve goalkeeper David Ospina. “I have complete confidence in David and I am not worried at all on that front.”

Arsenal’s worries are perhaps more general. Alexis Sanchez’s suggestion that the team “lacked the hunger” to win the title was another tough accusation for the manager to absorb. “You have to take these comments a bit into perspective,” said Wenger. “Belief comes with the last results you have made”.

Panorama show Mo Farah changed account to anti-doping investigators 14:41
Jack Conan returns to full training ahead of schedule 14:24
Irish Olympic hopefuls fly back from Italy amid coronavirus outbreak 14:12
All in the Game: how Firmino’s agent made him faster . . . on his laptop 14:00
Questions raised over Ireland v Italy fixture due to coronavirus 13:53