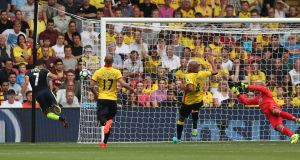 Arsene Wenger saw his Arsenal side win their first Premier League game of the season with a comfortable 3-1 victory at Watford before insisting there is more to come from his players as they close in on two new recruits.

An early Santi Cazorla penalty was added to by Alexis Sanchez and Mesut Özil as the Gunners raced into a commanding first-half lead at Vicarage Road.

They visibly tired after the interval and Watford pulled a goal back as club-record signing Roberto Pereyra scored a debut goal, but the hosts could not find a way to set up a grandstand finish.

The victory follows an opening-day defeat at home to Liverpool and a goalless draw at champions Leicester and, with the double signing of Valencia defender Shkodran Mustafi and Deportivo’s Lucas Perez all-but secured, Wenger is expecting his side to keep improving following a slow start.

“I think overall the performance was a strong one,” he said.

“Very fluent and a massive first half. We were 3-0 up at half-time and in the second half we still created many chances but we missed something in the final ball, like we did at Leicester.

“We are not capable in the end to maintain completely for 90 minutes exactly the same intensity physically, but overall it’s a very encouraging performance and a good win.”

Wenger, who confirmed it is merely a case of completing the paperwork to bring in Mustafi and Perez after both passed medicals on Friday, singled out Özil for praise and will feel vindicated for easing the Germany international back into action following his Euro 2016 exertions.

Asked about how good Özil’s performance was, Wenger replied: “Especially in the first half.

“In the second half he dropped physically, but of course, we need him. I think what we’ve seen from him today is what we want from him, to give assists, but he is going to score goals.

“So I am very happy that he scored today because that is what he is trying to add to his game.”

The Frenchman then revealed how close the club are to sealing deals for Mustafi and Perez.

“I think they should go through, both of them,” he said.

“They had medicals. We have to finish the paperwork and I don’t know exactly when we will announce it but look, I think it could be announced at the beginning of the week.”

Walter Mazzarri is still waiting for his first win as Watford boss having lost three out of four games in all competitions since his summer appointment.

But the Italian was pleased with his side’s second-half response and praised his quartet of debutants.

“There were a few things that went against us. We lost two main players today so the rest of the team was not quite ready for that situation.

“We are working and the results will come. In the second half we played good football and we should have scored more.

“Cech was amazing and made some great saves. Pereyra, (Daryl) Janmaat, (Younes) Kaboul and (Isaac) Success all came in and did very well.”